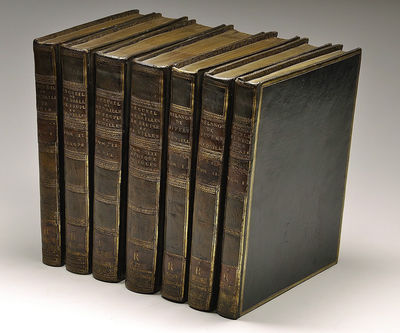 by Pellerin, Joseph
Paris: Guerin et Delatour, 1762. First Edition. Hardcover. Very good. Dates: 1762-1766. Quarto. Eight volumes in seven, COMPLETE THUS, with 202 folding engraved plates, illustrating more than 4000 coins and medals (!). The eight volumes contain numerous elaborately engraved vignettes, head- and tailpieces throughout. Collation: pp. iv; 220; 22 engraved folding plates. + xxviii, 207 (1); xviii, 255 (1); liv, 288 (1), including Tables; 136 folding engraved plates. + iv, 356; iv, 376; 32 folding engraved plates. + xii, 70; 2 folding plates; viii, 200; 10 folding plates. BINDINGS: Elegant contemporary blue morocco, smooth spines gilt, all edges gilt, lower compartments gilt with the original shelf-marks of the first owner Chretien Francois de Lamoignon (1735-1789), inner dentelles gilt, marbled pastedowns and endpapers (spines lightly faded to chestnut brown, one headcap chipped). ¶ The Lamoignon copy of the catalogue of the finest private numismatic collection ever formed by a single individual, a pioneering work of illustration and scholarship, with more than 4000 coins and medals presented on 202 folding engraved plates. ¶ Joseph Pellerin (1684-1782) is the most celebrated numismatist of the Ancien Regime, and is considered to be one of the founders of modern numismatics. In public life, he served Louis XV as one of the first Directors of the French Royal Navy. Upon his retirement, in 1745, the king promoted him to the rank of General, granting him a pension of 8000 pounds. Pellerin then began the second phase of his life, namely that of a numismatist, dedicating himself to the study of ancient coins and medals. He was to form the largest and finest cabinet ever owned by a private individual, estimated to have contained about 44,000 separate pieces. Pellerin's name is synonymous with his epochal Recueil de medailles, a vast scholarly work that was absolutely unprecedented in the study of numismatics. In it, Pellerin single-handedly introduced the historical method in the classification of medals, adopting a logical methodology, and providing insightful explanation with great keenness of observation (despite the fact that he was becaming increasingly blind in later life). Pellerin's Receuil was the acknowledge inspiration for Joseph- Hilaire Eckhel's Doctrina numorum veterum (1792), today widely recognized to be the "Bible of Numismatics." ¶ Louis XVI, an aspiring numismatist, purchased 32,500 pieces from the Pellerin collection in 1776 for the astronomical sum of 300,000 pounds (!) -- these medals now form the most important component of the Cabinet des medailles at the Bibliotheque Nationale. After Pellerin's death, his library and the rest of his numismatic collections were sold at auction by her heirs. Lamoignon was inspired by the ideals of the French Enlightenment. He entered public life at an early age, becoming a magistrate of Parlement in 1755; he was to become an important actor in the troubles which heralded the French Revolution. First on the side of the Parlement, and later on that of the king (who named him Garde des Sceaux in 1787), Lamoignon was one of the assistants of Lomenie de Brienne, whose unpopularity -- and fall -- he was to share (Lamoignon died on 15 May 1789, presumably by suicide). He left behind a magnificent collection of books, most of which he had had elegantly bound by Enguerrand, the Royal Binder, in the highest quality goatskin morocco. A catalogue of the Lamoignon Library was printed for private circulation in 1770. Lamoignon was one of the earliest collectors to request that the date of publication appear at the foot of the spine, usually on the first volume only (as here), along with the actual library shelf-marks. The Lamoignon library was purchased en bloc by Thomas Payne and sold in Paris in 1791 and 1792 (cf. "Catalogue des Livres de la Bibliotheque de feu M. de Lamoignon, Garde de Sceaux de France"). We consulted the sale catalogue of the Lamoignon library, in which this Pellerin set appears as lot 5715. While some additions to Pellerin's Recueil appeared in later years, Lamoignon evidently did not own these less significant, practically unillustrated volumes, namely: the two small Supplements of 1767 which contained only 9 plates, and two titles that were published outside France, namely the Lettres de l'auteur (Frankfurt, 1770) and further Additions (The Hague, 1778), together containing only 4 engraved plates. ¶ CONDITION: In beautiful unsophisticated state, printed on fine paper: the text and plates are crisp and white, virtually without blemish. Suitable for study and exhibition. ¶ LITERATURE: Domenique Gerin, "Le Portrait de Joseph Pellerin" in: Le Cabinet des medailles, Revue de la Bibliotheque nationale de France (1994, No. 3). Barbier IV, 70. Hoefer XXXIX, 494-495. Querard VII, 28. On the Lamoignon Library and the bindings therein, see Dibdin's Bibliographical Decameron (vol. II, p. 497). ¶ PROVENANCE: Chretien Francois de Lamoignon (1735-1789) with his label ("Bibliotheca Lamoniana Z 38") inside volume 1, his ink stamp on leaves A2 in all seven volumes, and his shelf-marks (2 R 46, 2 R 47, 2 R 48, 2 R 49, 2 R 50, 2 R 51, 2 R 52) tooled at the foot of the spines of each volume (these shelf-marks are also written on the front flyleaves of each volume. ¶ Lamoignon's set was bound in the famed workshop of Pierre & Etienne Enguerrand (a.k.a. Anguerrand). Pierre Enguerrand was royal binder to Louis XV from 1759 to 1766; he was succeeded by his son Etienne in 1767, who served as royal binder to Louis XVI until 1783. The shop accepted commissions from the foremost collectors of the age, such as the Abbe Rothelin, the Comte d'Argenson, the Marquis de Paulmy (son of Comte d'Argenson and founder of the Bibliotheque de l'Arsenal), and Lamoignon, for which see Sabrina Le Bris, "La communaute des relieurs et doreurs parisiens a la fin de l'Ancien Regime (1776-1795)" (Thesis: Ecole nationale des Chartes, 1995). See also Thoinon, "Notes historiques sur les relieurs des rois de France" in: Le Moniteur du bibliophile, Vol. 1 (1878) p. 363. (Inventory #: 139)
$9,500.00 add to cart or Buy Direct from
Michael Laird Rare Books
Share this item

New York : Gemor Press [i.e. The Author] , 1944
(click for more details about [SIGNED]. Under a Glass Bell)
View all from this seller>