[TEXANA / LAW]. Hans Teichmueller. Biographical Sketch. Addresses and Letters to his family. [Prepared] by his loving wife and daughters 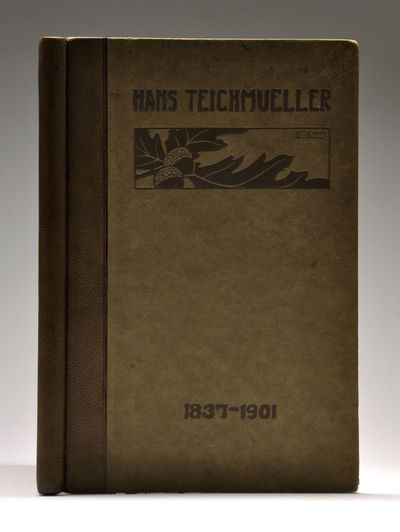 by Teichmueller, Hans (Early Texas Judge)
Austin: Von Boeckmann-Jones, 1908. First Edition. Hardcover. Very good. Small folio. Bound in original publisher's brown boards, upper cover decorated with a large vignette of acorns and oak leaves (signed "M.T." - illustrator not identified), recent brown morocco spine. Excellent, attractive copy. ¶ RARE, EARLY TEXAS JURISPRUDENCE as practiced by one of the original german immigrants. "Hans Teichmueller (1837-1901), judge and lawyer, was born in Braunschweig (Brunswick), Germany, on March 7, 1837, the third son of an army officer. At the age of fourteen, after several years of private training, he attended a boarding school where he had intended to study theology. He later gave up this idea to become a cabin boy on a steamer to New York. While in New York he stayed with a German lawyer who tried to persuade him to remain and study law. Not long afterwards Teichmueller returned to Germany and entered the gymnasium of Blankenburg in the Harz Mountains. The sudden death of his father a few years later made it impossible for Teichmueller to secure a university education, so he came to Texas to join his cousin, Arthur Meerscheidt, who lived on a farm in Fayette County. On June 16, 1858, Teichmueller married Augusta Kellner, whose father, a modern-language teacher, had taught him English when he first arrived in Fayette County. The Teichmuellers had five children. For a few months they farmed near Highhill in Fayette County, before moving to New Ulm, where Teichmueller studied law and taught school. His duties as a teacher exempted him from military service, but he served for about half a year as secretary of a militia at Brenham. Before the end of the Civil War he moved to La Grange, Fayette County, to begin his law practice. He passed his bar examination on May 16, 1866, and then entered the law firm of L. Lindsey and B. D. Shropshire. He served as county judge in 1869-1870 to fill the unexpired term of Reinhardt Hillebrandt. After several law partnerships he formed one with Meerscheidt and a man named Dunn, which terminated with Teichmueller's election to the judgeship of the Twenty-second Judicial District in 1884. Judge Teichmueller, a Democrat, read two papers before the Bar Association of Texas (later the State Bar of Texas) and wrote several articles on such subjects as trusts, economic freedom, expansion of the constitution, American jurisprudence, and bankruptcy; he intended to write a book on the homestead law. He died at La Grange on February 17, 1901" (SOURCE: Rudolph L. Biesele, Handbook of Texas). ¶ REFERENCES: Frank Lotto, Fayette County: Her History and Her People (Schulenburg, Texas: Sticker Steam Press, 1902; rpt., Austin: University of Texas Press, 1981). Proceedings of the Texas Bar Association, 1895, 1896, 1901. * Ours appears to be the only copy on the market. (Inventory #: 701)
$375.00 add to cart or Buy Direct from
Michael Laird Rare Books
Share this item