Lex Londinensis, or, The city law: shewing the powers, customs and practice of all the several courts belonging to the famous city of London [...] 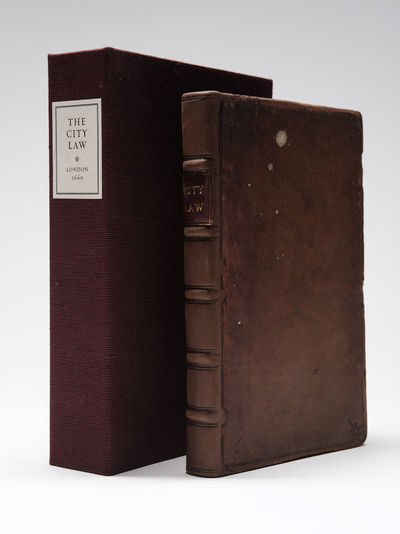 by [London Courtrooms]
London: Printed by S. Roycroft for H. Twyford, 1680. First Edition. Hardcover. Very good. 8vo. 4 ff., 260, [11] pp. Signatures: A4 B-S8, COMPLETE. Printed in Roman and Black Letter. Contemporary English calf, rebacked with new spine and red morocco label, text slightly browned. Preserved in a red cloth protective case. ¶ Seventeenth-century "Court TV": Tours of the Courtrooms of London. ¶ Fascinating Restoration era handbook and guide to the various courts of law in London; it is a complete revision of the so-called "City Law" of 1647 and 1658, as we see from the Preface: "There hath been several times printed a Tract, called The City Law, [1647, 1658] which treats of some of these Courts: But there being many Omissions and Defects therein, this Discourse hath not only supplyed the same, but also rectified the mistakes therein." Of the greatest interest to legal historians of every nationality. The Sunderland copy (sale of the Bibliotheca Sunderlandiana, lot 6848) -- subsequently in the Theological Institute of Connecticut (now known as the Hartford Seminary) with blind stamps on first and last leaves. NB: in 1976 a collection of more than 200,000 books from the Hartford Seminary Library were sold to Emory University, including this one --> deaccessioned from Pitts Theology Library. * TITLE-PAGE TRANSCRIPTION: "Lex Londinensis, or, The city law: shewing the powers, customs and practice of all the several courts belonging to the famous city of London, viz. the Lord Majors Courts, the Ophans Court, the Court of Hastings, the Court of Common Councel, the Court of Aldermen, the Wardmores, the Courts of Conservacy for the river of Thames, the Court of Conscience, the Sheriffs Court, the Chamberlains Court: together with several acts of Common Councel, very useful and necessary to be known by all merchants, citizens, and freemen of the said city: and also, a method for ministers within the said city to recover their tithes, with a table to the whole book." ¶ REFERENCES: ESTC R2792; Wing (2nd ed.) L1858. * Scarce. (Inventory #: 541)
$750.00 add to cart or Buy Direct from
Michael Laird Rare Books
Share this item