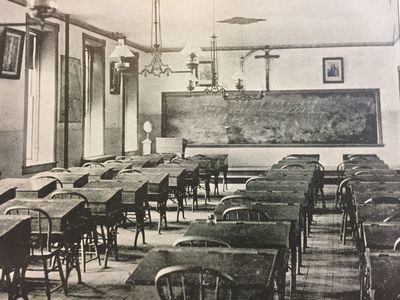 by St. John's University, Collegeville, MINN
Collegeville, Minn, 1892. First Edition. Softcover. Good. Octavo. [76] pp., printed on thick paper, with many unpaginated photo plates. In the original blue wrappers (6 x 8 inches). Spine frayed, some soiling to covers (old collection number on front), minor creasing. ¶ Scarce, complete copy of the very significant "Jubilee" catalogue for the 1891-92 academic year at St. John's University, Collegeville, Minnesota. "This commencement was called the 25th annual commencement, as it was customary to count from the establishment of the college on its present site in 1867. Hence the catalogue of that year [1892] was made especially attractive; it was printed on superior paper and embellished with several half-tone engravings. In addition to the usual information, there was a brief sketch of the history of the institution since 1867, together with a list of all the graduates and professors during those twenty-five years. The whole number of professors was 106; the degree of D.D. had been conferred on three candidates, that of Ph.D. on two, that of A.M. on four, that of Ph.B. on 24, that on A.B. on 24, and that of M.A. on 366. For the year 1892 the total enrollment was 251 (33 seminarians and 218 in all other departments). Eleven medals were awarded; the degree of Ph.B. was conferred on five, that of A.B. on three and that of M.A. on 32 graduates" (Alexius Hoffmann, OSB: Saint John's University, Collegeville, Minnesota: A Sketch of Its History). (Inventory #: 92)
$47.00 add to cart or Buy Direct from
Michael Laird Rare Books
Share this item

[PRE-RAPHAELITES]. Catalogue of artistic & literary property removed from "The Pines", 11 Putney (the home of A.C. Swinburne and Walter Theodore Watts-Dunton)

London : Sotheby's , 1939
(click for more details about [PRE-RAPHAELITES]. Catalogue of artistic & literary property removed from "The Pines", 11 Putney (the home of A.C. Swinburne and Walter Theodore Watts-Dunton))
View all from this seller>