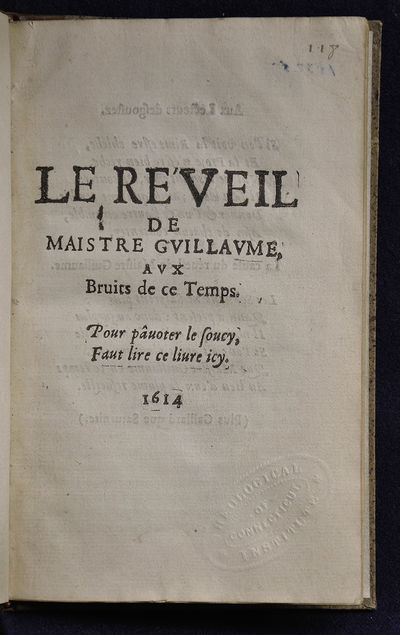 by Marchand, Guillaume (1555-1624), a.k.a. "Maitre Guillaume, Fou du Roi
S.l. (Paris?): s.n., 1614. First Edition. Hardcover. Very good. 8vo. Collation: A-D4, COMPLETE. 32 pp. Recent half calf over marbled boards in the antique style. Blindstamps of the Theological Institute of Connecticut (now known as the Hartford Seminary). NB: in 1976 a collection of more than 200,000 books from the Hartford Seminary Library were sold to Emory University, including this one --> deaccessioned from Pitts Theology Library. ¶ First edition of this "Fantastical chronicle of Nonsense on the subject of Peace. The text presents an inexhaustible catalogue of the wildest neologisms." (Mercier, La Litterature Facetieuse). The pamphlet is now very rare and was apparently suppressed upon publication according to Jules Mathorez in his bibliography of Maitre Guillaume. ¶ Until the age of 40 Gaillaume Marchand (a.k.a. Maitre Guillaume) practiced as an apothecary in Louviers, Normandy. A respected Bourgeois in his town, he was conspicuous for his exemplary piety, his devotion to the Catholic religion and his hatred of the Huguenots. In 1590, when the troops of Henri IV attacked his city, Guillaume did not hesitate to take up arms to fight them. The partisan blows to his head made him a changed man. The following year we find him as a "bouffon" in the service of the Cardinal de Bourbon, before receiving the ultimate accolade: "Fou du Roi" to Henri IV. Maitre Guillaume never recovered from the death of Henri IV, and continued their dialogues in the realm of shadows. Maitre Guillaume also served with distinction Henri's successor Louis XIII. Contemporary accounts suggest that he was "a dreaming half-witted fellow [...] a Roman Catholic, like [Gascon] Chicot, but he was less tolerant. He so hated the reformed religion, and the Reformation itself, that he always used the words 'ruined religion' or the 'Ruin' to show a fool's contempt for what he could not understand. [...] Even Cardinals would condescend to argue with this Norman fool, and boast of victories in disputes where there was small common sense and less wit on either side, and little honour to be gained by triumphing over a 'natural.'" (SOURCE: Doran, History of Court Fools, 1858, pp. 288-9). ¶ Although little-known today, Maitre Guillaume was a popular author and cultural figure; Alfred Canal lists 77 works published by, or about, Maitre Guillaume through the year 1632, including many orations on his death in 1624. (SOURCE: Recherches historiques sur les fous des rois de France, pp. 207-229). ¶ Of this first edition two issues exist (priority indeterminate): in both the pagination skips p. 25; the final leaf of one issue is numbered "33" while the other is numbered "32." Our copy, which is perfectly complete, conforms to the latter pagination. ¶ REFERENCES: Cioranescu, XVIIeme, no. 34341. Bourgeois et Andre, IV, no. 2042. Lindsay & Neu 3035. Arbour 7165. Alain Mercier, La Litterature Facetieuse sous Louis XIII 1610-1643, no. 714 (cf. also no. 713). Jules Mathorez, "Notes sur Maître Guillaume [Guillaume Marchant, de Louviers], fou de Henri IV et de Louis XIII, contribution a l'histoire de la presse francaise" (in: Revue des livres anciens: documents d'histoire litteraire, de bibliographie & de bibliophilie, 1913, pp. 264 et passim). Mathorez, "Bibliographie de Maitre Guillaume" (in: Revue des livres anciens, 1914, pp. 326-327, no. 28). See also the monograph by Nicolas Buffetaut, "Maitre Guillaume, apothicaire et bouffon d'Henri IV" (2002). ¶ Of this work Worldcat does not list a single copy in America. (Inventory #: 682)
$900.00 add to cart or Buy Direct from
Michael Laird Rare Books
Share this item

by Morrow, Elizabeth and William Spratling

Croton Falls, NY : The Spiral Press , 1932
(click for more details about Casa Manana)
View all from this seller>