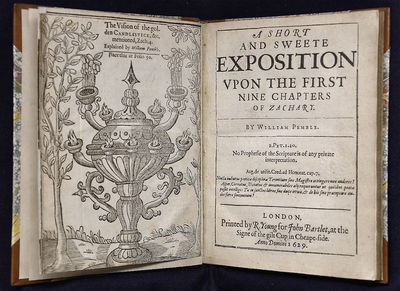 by Pemble, William (1592?-1623)
London: Printed by R. Young for John Bartlet, at the signe of the gilt Cup in Cheape-side, 1629. First Edition. Hardcover. Very good. 8vo. [8], 165 pp. including full-page woodcut plate bound as frontispiece (intended to be placed between pp. 50/51). COLLATION: A-Y4, without the final blank leaf, otherwise COMPLETE. Provenance: blindstamps of the Theological Institute Connecticut (now known as the Hartford Seminary) with ink-stamp. NB: in 1976 a collection of more than 200,000 books from the Hartford Seminary Library were sold to Emory University, including this one --> deaccessioned from Pitts Theology Library. Attractive recent half calf antique, marbled boards, five raised bands on spine, compartments gilt, red morocco label in the second. ¶ First Edition of this highly curious Elizabethan theological work, illustrated with a strange and wonderful woodcut of the "Vision of the Golden Candlestick" (Zech. 4). Rare on the market: this is the only copy known to us in private ownership; the last copy on the market was defective (sale at Sotheby's London on May 6, 1974, lot 73 - to Maggs). ¶ This interpretation of Zechariah (I-IX) is perhaps Pemble's final work: "He died in the flower of his age, as he was making his lectures on the prophecy of Zechariah (finishing but nine chapters of fourteen)... of a burning fever" (SOURCE: Fuller, History of the Worthies of England, vol. 3, p. 258). Published posthumously, as were all Pemble's works, through the offices of former tutor Richard Capel, who edited this work and signed the preface. "He appears to have been a good Hebrew scholar, and employs his learning very advantageously, particularly in expounding the book of Zechariah" (SOURCE: Orme, Bibliotheca Biblica, p. 345). ¶ "Pemble's work attracted attention long after his death, helping to influence Richard Baxter against Arminianism and shape the high-Calvinist tenets of the eighteenth-century Baptists John Gill and John Brine. Baxter and Thomas Blake each cited Pemble in their dispute over the covenants and the role of scripture as an instrument of the Spirit" (SOURCE: ODNB). ¶ REFERENCES: STC (2nd ed.) 19586. ESTC S114328. (Inventory #: 781)
$1,050.00 add to cart or Buy Direct from
Michael Laird Rare Books
Share this item

[PRE-LINNAEAN HERBAL, BEAUTIFULLY BOUND, HAND-COLORED THROUGHOUT]. The British Herbal: An History of Plants and Trees, Natives of Britain, Cultivated for Use, or Raised for Beauty

London : T. Osborne and J. Shipton , 1756
(click for more details about [PRE-LINNAEAN HERBAL, BEAUTIFULLY BOUND, HAND-COLORED THROUGHOUT]. The British Herbal: An History of Plants and Trees, Natives of Britain, Cultivated for Use, or Raised for Beauty)
View all from this seller>