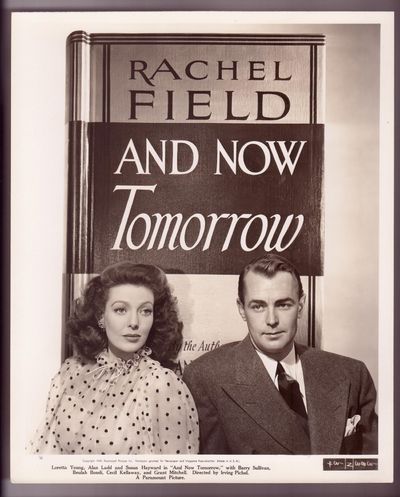 by Chandler, Raymond (Screenwriter), Field, Rachel (Novelist)
Hollywood: Paramount Studios, 1944. Chandler, Raymond. AND NOW TOMORROW. Hollywood: Paramount, 1944. 16 Near Fine original roughly 8" by 10" glossy vintage black & white publicity and scene stills from the movie, 11 of which are studio-stamped and double-weight. A rare collection of images from one of only six Hollywood film scripts written by mystery writer Raymond Chandler. Alan Ladd plays a doctor trying to cure deaf Loretta Young even as evil Susan Hayward is scheming ways to steal Barry Sullivan, Loretta's husband, away from her. The film was directed by Irving Pichel ("Jezebel" "The Moon Is Down" "They Won't Believe Me") who was later black-listed and victimized by the infamous McCarthy red scare witch hunt, which led to his early death in 1954. Plenty of Chandler touches in the characterizations. An interesting collection in exceptional original condition.. First Edition. Near Fine. Photograph. (Inventory #: 001649)
$350.00 add to cart Available from
Lakin & Marley Rare Books
Share this item
Lakin & Marley Rare Books
Offered by

UNDER THE GREENWOOD TREE (Superb Copy of the American First Edition, First Issue in Original Cloth)

New York : Holt & Williams , 1873
(click for more details about UNDER THE GREENWOOD TREE (Superb Copy of the American First Edition, First Issue in Original Cloth))
View all from this seller>