[Corrected Proofs for:] MARIA SABINA: HER LIFE AND CHANTS 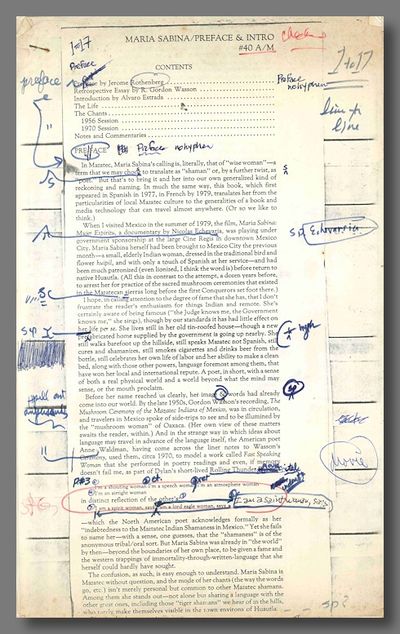 by Rothenberg, Jerome, et al.
[Santa Barbara: Ross-Erikson, 1981. ca. 100 leaves. Small folio (8.5 x 14"). Loose, uncorrected galleys, reproduced in photocopy, with original corrections in ink and others reproduced in photocopy. Editorially used, hence just good, in captioned folder. The set of foul proofs associated with this production, the first English language edition of this work on the influential Mazatec curandera, with a Preface by Rothenberg, a Retrospective Essay by R. Gordon Wasson, and an Introduction by Álvaro Estrada (who is credited with the original Spanish text). The original corrections and revisions are in various hands, including those that would appear to be a proof- reader's. Although not noted in these proofs, the translations were prepared by Henry Munn. The file enclosure credits Rothenberg serving as editor as well as author of the Preface; Polkinhorn records Estrada as the editor. POLKINHORN E8. (Inventory #: WRCLIT73464)
$175.00 add to cart or Buy Direct from
William Reese Co. - Literature
Share this item