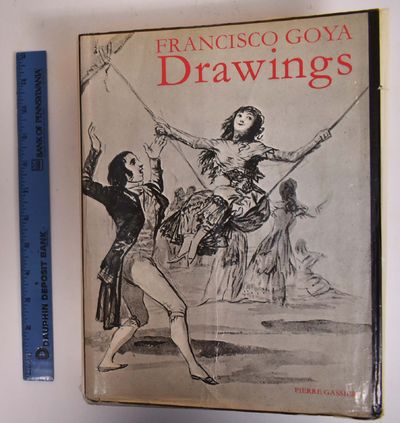 by Gassier, Pierre
New York / Washington: Praeger Publishers, 1973. Hardcover. G+ (DJ is slightly aged, soiled, and loose-fitting; book is generally clean, museum stamp inside). Heavy cream cloth, white & BW illus. dust jacket, 656 pp., many BW illus.; weighs over 6 lbs. Presents the original albums of drawings rendered by Spanish artist Francisco Goya (1746-1828). "Begun in 1796, when Goya was staying in Andalusia with the Duchess of Alba, and continuing until his death in Bordeaux in 1828, the albums of drawings form a powerful and evocative diary in pictures, expressing in the subtle play between pencil or brush and paper the artist's fits of violent indignation with a world gone awry, his strong social conscience that refused human bondage, and his obsession with the grotesque. Grouped in albums of numbered sheets and accompanied by Goya's own titles or commentary, often moralizing and satirical, the drawings show a very different artist from the offical court painter of his earlier years." (dj). (Inventory #: 147164)
$125.00 add to cart or Buy Direct from Mullen Books
Share this item