Behavior of Prices on Wall Street: 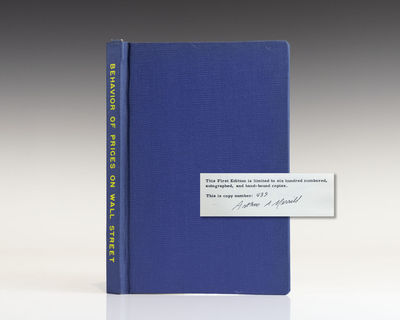 by Merrill, Arthur A
Chappaqua, New York: Analysis Press, 1965. First edition. Octavo, original blue cloth. Limited to six hundred numbered signed copies. In fine condition. The signed limited edition is rare. Arthur Merrill is one of the most prominent stock market statisticians ever to practice the craft in the market. "There are few market patterns that occur with such unbelievable regularity that you must become aware of them ... No one, to my knowledge, has engaged in more in-depth research than Arthur Merrill. Merrill's Behavior of Prices is an excellent work on the subject." This book concentrates on the profitable study of timing. The author has found the market to be similar to a warped roulette wheel. At certain predictable times, it has a definite bias upward; at other predictable times, the inclination is downward. A knowledge of this bias is useful to long-term as well as short-term investors in the improvement of buying and selling prices. The text is addressed to non-mathematical investors, and includes all of the suggestions for profit. In addition, serious students will find useful material in the appendixes. The pioneering work of Art Merrill in his classic book, The Behavior of Prices on Wall Street, clearly demonstrates the statistical reliability of pre-holiday behavior in the Dow Jones Industrial Average. Merrill showed that the odds of a higher-price close on the day before major U.S. holidays were not only very high but also statistically significant. (Inventory #: 4476)
$850.00 add to cart or Buy Direct from
Raptis Rare Books
Share this item