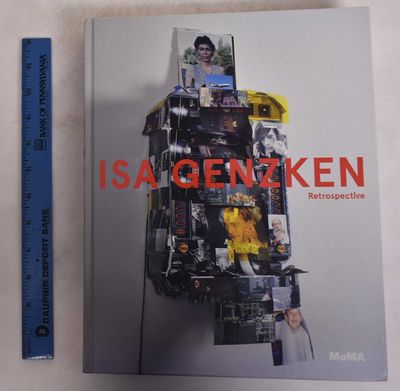 by Breitwieser, Sabine et al.
New York: MoMA, 2013. Hardcover. VG. Color-illus. boards with red lettering on bright blue spine. 334 pp. with 320 color and bw images. Born in postwar Germany in 1948, Genzken studied at the Düsseldorf Academy of Fine Arts before embarking on a career that would ultimately encompass deep explorations of an extraordinary range of mediums, including sculpture, film, drawing, painting, photography, and assemblage. For nearly forty years, Genzken has engaged with both the most salient aesthetic concerns of the time as well as broader questions related to our experience of the exuberant and disorienting flux that defines contemporary culture. The modern urban environment, the nature of space and time, our relationship to the architecture that surrounds us, as well as the ramifications of seminal events such as the collapse of the Berlin Wall and the aftermath of September 11th -all are examined with virtuosity, humanity, and incisive wit in Genzken's diverse production. Published in tandem with the artist's first major career survey in the United States, Isa Genzken: Retrospective is the most comprehensive chronicle to date of the work of one of the most ambitious and influential artists of the past half century. (from the cover). (Inventory #: 147233)
$60.00 add to cart or Buy Direct from Mullen Books
Share this item