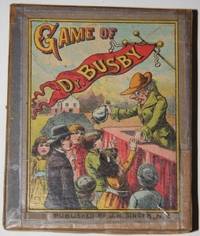 New York: J.H. Singer. NA. Very Good. N.d., circa 1880s. Twenty cards, as called for, with colorful chromolithography and box. Lacking instruction booklet. The five families, or suits, are the Melons, the Bulls, the Corns, the Cods and of course, the Busbys. The Melons are a black family, and its members are Caesar Melon, Dr. Busby's Coachman, Dinah Melon, his wife, Cantaloupe Melon, his daughter, and son Washington Melon. Besides the watermelon symbol on each of these cards, the ludicrousness of the caricatures can leave no doubt of the creator's prejudices -- the Corns and the Busbys are depicted as funny caricatures, of course, but not with anywhere the same level of exaggeration and mean-spirited absurdity. This version of the game should be understood as a period piece and a relic that is a reflection of late nineteenth century popular attitudes on race. The game itself was a very popular card game, originating probably in the 1840s, and there were many graphic versions of the game, as well as similar games with slightly different names. While we believe rules might have been furnished in the box, the rules of the game were such that most people would have known them anyway and so the rules would not have been essential. The cards have light soiling here and there. The box has unattractive tape repairs along all its sides, both of the lid and the base, but the top title graphics survive. (Inventory #: 003927)
$450.00 add to cart Available from
White Fox Rare Books & Antiques
Share this item
White Fox Rare Books and Antiques
Offered by


(click for more details about Album of 29 Watercolors from 19th Century Pondicherry, India)
View all from this seller>