GLORIANA, OR THE UNFULFILL'D QUEEN .. 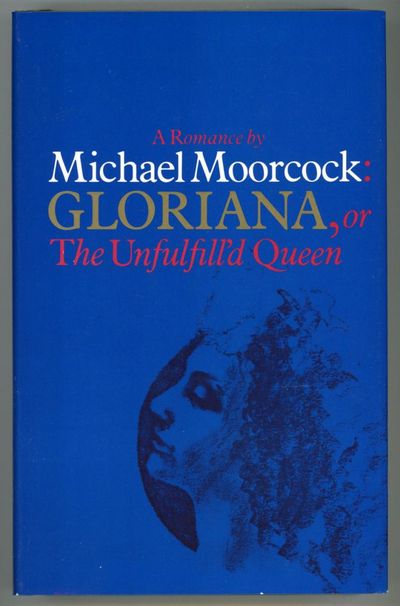 by Moorcock, Michael
London: Allison & Busby, 1978. Octavo, boards. First edition. "In one of the best of Moorcock's many novels, he employs the conventions of the eighteenth-century novel in conjunction with influences such as Edmund Spenser's THE FAERIE QUEEN (1590; 1596) to create a truly original work about an alternative England and its history." - Barron (ed), Fantasy and Horror (1999) 7-266. GLORIANA is a long novel: copiously inventive, funny, exciting, sometimes disgusting, and always rich with allusions. It contains references not only to Spenser, Peake and English history, but to the whole of Michael Moorcock's own extensive body of fiction -- from Sexton Blake and Elric of Melnibone to Una Persson and the Dancer at the End of Time. Although brilliantly successful in its own terms, it is also a portmanteau work which serves as a keystone in a personal mythology: a summing-up of the fifty or so novels which its author had already produced, and a clearing of the decks in preparation for other major books to come." - Pringle, Modern Fantasy: The Hundred Best Novels 67. "An evocative, tender and haunting novel which ranks among the best examples of contemporary fantasy with a classical, historical background." - Barron (ed), Fantasy Literature 4A-183. Winner of the 1979 World Fantasy Award and the 1979 John W. Campbell Award. A fine copy in fine dust jacket. (#152188) (Inventory #: 152188)
$200.00 add to cart or Buy Direct from L.W. Currey
Share this item
L.W. Currey Inc.
Offered by