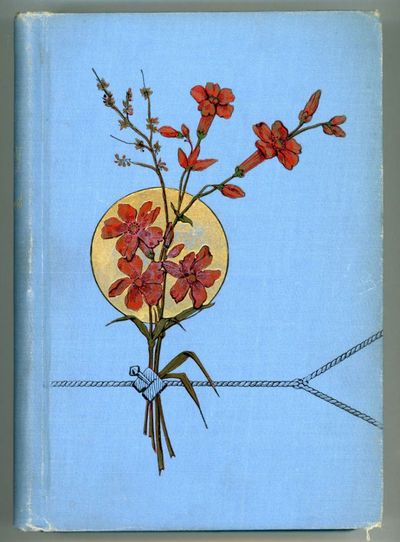 by Raymond, James F.
Philadelphia: T. B. Peterson & Brothers, 1891. Octavo, pp. [17-18] 19-413 [414: blank] [415-432: ads] [note: text complete despite gap in pagination, first leaf is title leaf (pages 17-18), flyleaves at front and rear, original blue pictorial cloth, front and rear panels stamped in red, black and gold, spine panel stamped in gold. a.e.g. First edition. One of several variant bindings, priority, if any, unknown. A series of narratives, largely concerned with the American Civil War, but including a significant episode telling the history of a utopian agrarian community established by descendants of shipwrecked Pilgrims on uncharted islands in the Atlantic. The existence of the colony is revealed when a colonist leaves the region in a newly invented balloon and is wrecked at sea during a storm. The aeronaut is rescued, along with a manuscript account of the history of the colony. The survivor, a mute invalid as the result of his ordeal at sea, is taken to England, and later to America by a benefactor who persuades Congress to send an expedition to find the colony. A lengthy search is unsuccessful and no colonists are found. "Both in narrative technique and ending the novel remains a notable blending of realism (the Civil War) and the lost race motif." - Clareson, Science Fiction in America, 1870s-1930s 638. Sargent, British and American Utopian Literature, 1516-1985, Additions. Bleiler (1978). p. 164. Reginald 12061. Wright (III) 4446. Eaton catalogue, III, p. 48. Stuart Teitler's bookplate affixed to the front paste-down. Cloth rubbed at edges, inner front hinge cracked, but still a tight, very good copy. (#152139) (Inventory #: 152139)
$100.00 add to cart or Buy Direct from L.W. Currey
Share this item
L.W. Currey Inc.
Offered by