1913 - 1914 Archive of Manuscript Documents Regarding the Founding of the NY State School of Agriculture on Long Island (Farmingdale) & the Appointment of Trustee Edward H.L. Smith of Smithtown to the Board 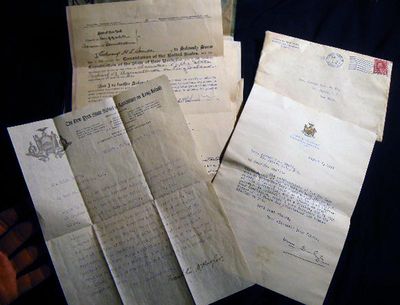 by (Americana - New York - Long Island - Education History - Farmingdale)
Farmingdale, Nassau Co., L.I., N.Y.: Not Published, 1913. Archive consists of 8 documents, including: Aug. 7 1913 typed letter signed on State of NY Executive Chamber letterhead to Edward H.L. Smith, St. James, L.I. "...establishment of the New York State School of Agriculture on Long Island is a work of which New York State should be justly proud...it affords me great pleasure to appoint you as a Trustee...Very sincerely your friend, (signed in pen) Wm. Sulzer" (William Sulzer (1863 - 1941) Governor of NY at the time, first and only NY governor to be impeached) - this with the original mailing envelope; August 19, 1913 on printed New York State School of Agriculture on Long Island letterhead, TL signed by the board member from Brooklyn, Franklin H. Hooper, inquiring about the appointment of Smith and further explaining that Smith was to take the place of Ezra A. Tuttle of Eastport and asking him of all this directly "...because of the complicated situation which exists at present in Albany..." F.H. Hooper (1851 - 1914) considered one of the main proponents of the founding of the school and a prominent Brooklyn, NY & national educator; with a copy of the Aug. 23rd 1913 completed and signed Oath of Office of Smith, witnessed and notarized; and the Aug. 26 letter regarding the office, signed by Mitchell May the Sec. of State of NY; On Aug. 28 Franklin Hooper acknowledges the receipt of the letter of appointment & oath & gives notification of the next Board meeting, with mailing envelope; with the October 15th, 1913 8-page typed document signed "Estimate of Money Needed for Running Expenses of the New York State School of Agriculture on Long Island from January 1st, 1914 to January 1st, 1915" prepared by A.A. Johnson and signed by him in ink at the introductory passage and which gives a detailed budget for the school, various departments, salaries, the demonstration farm and more, in the original blue paper over-folder; a December 16, 1913 typed letter, 2 pages, signed by Hooper, writing to all the Board, which declares that "...on Thursday, December 11, representatives of the State Comptroller and of the State Attorney General went to Farmingdale, and that Messrs. Mott, Smith and Ruland were on that day paid by the State Comptroller for their three farms respectively in pursuance of the contract as made by the Board of Trustees of the school and the three vendors...thereby completing the transaction for the purchase of lands for the school. It is now possible for members of the Board of Trustees to enter upon the lands and to prepare to use them for the purposes of the school..." and with further information regarding the surveying of the property, (and) a February 5, 1914 TLS by Hooper to Smith, regarding information to be sent to Lathrop Brown; the letters with old fold lines, light wear and in very good condition; envelopes worn, stained, used; overall, in very good condition and an excellent group of letters regarding the historical foundation of the school at Farmingdale, the oldest public institution of higher education on Long Island.. Manuscript. Not Bound. Very Good. (Inventory #: 23286)
$1,500.00 add to cart or Buy Direct from Certain Books
Share this item
Certain Books
Offered by