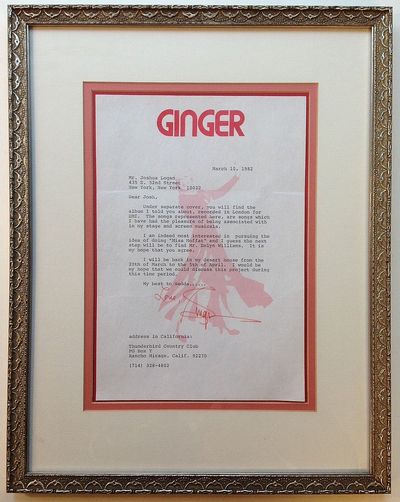 by ROGERS, Ginger (1911 - 1995)
1982. unbound. 1 page, 10.25 x 7 inches, no place, March 10, 1982. In this letter, Rogers sends an album (not included) and discusses her plans for upcoming projects, in part: "Under separate cover, you will find the album I told you about, recorded in London for EMI. The songs represented here, are songs which I have had the pleasure of being associated with in my stage and screen musicals. I am indeed most interested in pursuing the idea of doing 'Miss Moffat' and I guess the next step will be to find Mr. Emlyn Williams. It is my hope that you agree..." Two horizontal folds; near fine condition. Float-mounted with red trim, double-matted in pink and white, and set in a decorative silver frame measuring 16 x 13 inches. (Inventory #: 256698)
$350.00 add to cart or Buy Direct from
Argosy Book Store
Share this item

London : Tallis, John , 1857
(click for more details about Turkey in Asia)
View all from this seller>