Memoirs of Major Robert Stobo, of the Virginia Regiment 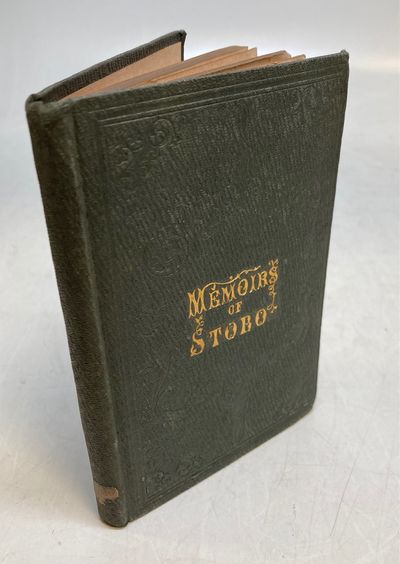 by STOBO, Robert
Pittsburgh: John S. Davidson, 1854. hardcover. good. Ed. by N. B. Craig. Folding map of Fort Du Quesne. vi, 9-92pp. (pages numbered as published). 18mo, original green cloth, corners bumped, scattered light foxing, mostly to margins, map is very lightly foxed, mostly in blank areas. Pittsburgh: John S. Davidson, 1854. First published in London, 1800. That edition and this 1854 second edition "...were apparently printed from slightly different manuscript copies." Howes S-1015. "...he (Stobo) fought with Washington at Fort Necessity, July 3, 1754, and was held hostage by the French under terms of capitulation which were later violated by both parties." Dictionary of American Biography, XVIII, p. 35. While in the French prison at Fort Du Quesne, Stobo smuggled letters to George Washington. The French became aware of their contents and tried Stobo for treason. Stobo was held in a Quebec prison from which he escaped to Louisbourg. Stobo rejoined the British troops there and participated in the expedition against Quebec. Graff 3992. Field 382. Sabin 91869 (Inventory #: 256702)
$375.00 add to cart or Buy Direct from
Argosy Book Store
Share this item

Flower bouquet with a butterfly


(click for more details about Flower bouquet with a butterfly)