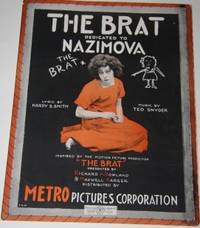 by Smith, Harry B., lyrics. Snyder, Ted, music.
New York: Waterson, Berlin & Snyder Co. , 1919. First Edition. Wraps. Near Fine. A knock-off song inspired by the 1919 hit Nazimova movie, now lost. 30 by 23 cm. Title page, 2 page score, and ad, with partial scor, for "That Tumble-Down Shack in Athlone" on rear cover. Nazimova had starred two years earlier on Broadway in the original play as well. She produced the movie, as well as co-wrote the screenplay with her supposed husband, Charles Bryant, who starred alongside her. The sheet music has a photograph of Nazimova in an orange red frock on its cover. Light wear. (Inventory #: 003953)
$35.00 add to cart Available from
White Fox Rare Books & Antiques
Share this item
White Fox Rare Books and Antiques
Offered by