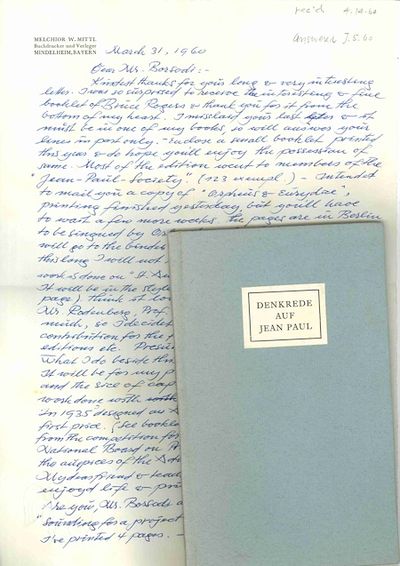 by [Mittl, Melchior W. (printer)]: Börne, Ludwig
[Mindelheim, Bayern: Melchior W. Mittl, 1960. 12mo. Boards, printed label. Trace of sunning to spine, otherwise about fine, unopened. First edition in this format. One of 123 copies printed largely for distribution to members of the Jean Paul Society. Accompanied by a dense, very closely written a.l.s., Mindelheim, 31 March 1960, from Mittl, in English, to a small press printer in the US, thanking him for a recent gift, describing this enclosed book, progress on his edition of ORPHEUS & EURYDICE (published under the Three Kings Press / Drei König Press imprint), his design of a new type-face, and much else (ca. 350 quite informative words). Accompanied by the original addressed envelope. (Inventory #: WRCLIT73531)
$100.00 add to cart or Buy Direct from
William Reese Co. - Literature
Share this item

SOME EXPERIENCES OF AN IRISH R. M.

New York : The Derrydale Press , 1927.
(click for more details about SOME EXPERIENCES OF AN IRISH R. M.)

SHALL WE TELL THE PRESIDENT

New York : Viking , [1977].
(click for more details about SHALL WE TELL THE PRESIDENT)
View all from this seller>