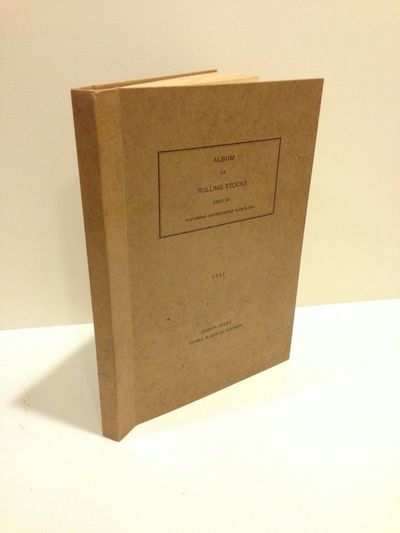 by [Photography] [Occupied Japan] [Railroads]
NP (Osaka, Japan?): Liaison Office, Osaka Railway Division, 1947. 4to. 66 pp. Text, primarily in the form of charts, includes types and measurements of main locomotives used for passenger and freight trains, gasoline cars, electric locomotives and cars, passenger cars and freight cars. Mounted through the text are 89 original black and white photographs, each measuring 4 x 6 inches, of the rolling stock, including a picture of the "Dixie Limited, an express train for exclusive use of the Allied Forces, running between Tokyo and Hakata." During World War II, many Japanese companies were consolidated as part of the war effort. With Japan's defeat and occupation by allied forces, the various conglomerates that had been created were broken up by order of the Supreme Commander, Allied Powers. This included the Japanese railway companies, though railroads remained a vital means of transportation not only for locals, but for the occupying forces. Apparently not recorded on OCLC. Light brown paper-covered boards; black lettered title on front board. A very good copy. (Inventory #: 60276)
$1,500.00 add to cart or Buy Direct from
Bartleby's Books
Share this item

THE GRANDFATHER'S LEGACY; CONTAINING A SKETCH OF HIS LIFE AND OBITUARY NOTICES OF SOME MEMBERS OF HIS FAMILY, TOGETHER WITH LETTERS FROM HIS FRIENDS

Washington, DC : Henry Polkinhorn , 1879
(click for more details about THE GRANDFATHER'S LEGACY; CONTAINING A SKETCH OF HIS LIFE AND OBITUARY NOTICES OF SOME MEMBERS OF HIS FAMILY, TOGETHER WITH LETTERS FROM HIS FRIENDS)

ESSAYS AND NOTES ON HUSBANDRY AND RURAL AFFAIRS

Philadelphia, PA : printed by Budd and Bartram, for Thomas Dobson, at the Stone House, No. 41, South Second Street , 1801
(click for more details about ESSAYS AND NOTES ON HUSBANDRY AND RURAL AFFAIRS)
View all from this seller>