The Saint John's Fragment. Against the Odds 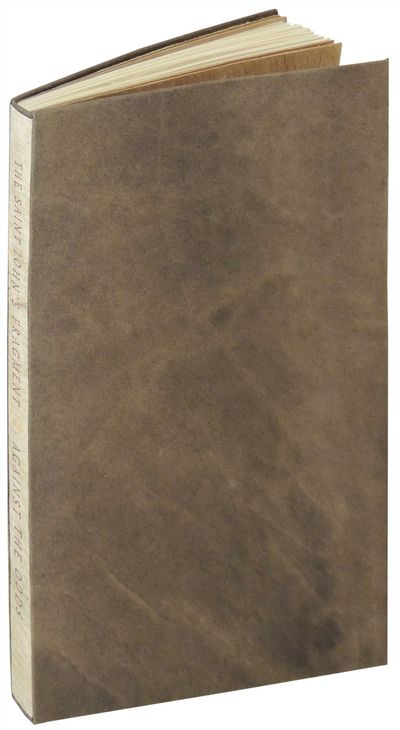 by [Foolscap Press] Annwn, David; Thomas Ingmire, calligraphy
Santa Cruz: Foolscap Press, 2015. Paperback. Fine. Paperback. Number 19 of 116 copies. Signed by the poet and calligrapher. A beautiful production from this press. From the book artists' description of this book: "This book is a collaboration between Anglo-Welsh poet, critic and publisher David Annwn and the celebrated San Francisco calligrapher Thomas Ingmire. Originally, they created a truly remarkable unique book with the subject matter Saint John's Fragment. This was great for the owner, but leaves nothing for the rest of us. We ve gone back to the collaborative drawing table with David and Thomas to create our own edition, the result of a second collaboration, and although still sharply limited, it allows something for those of us who want an echo of their astounding original work.The piece of papyrus called the Saint John's Fragment was acquired in an Egyptian market in 1920 by Bernard Grenfell, an English scientist and Egyptologist. It now resides in the collection of the Rylands Library at the University of Manchester in England.This scrap of paper-like material, measuring only 3.5 by 2.5 inches, is made from the pith of the papyrus plant. It is dated from between 100 CE and 150 CE and is generally accepted as the earliest extant record of a canonical New Testament text. Written on both sides of the papyrus, it must have been part of a codex, that is, a collection of sewn and folded leaves, not a scroll or an isolated sheet. That being the case, it would be among the earliest surviving examples of a literary codex. It was written in Greek in a script known as Hadrianic, named after Hadrian (76 CE-138 CE), the Roman Emperor of that era. David Annwn has responded to this fragment in a poem that always seem to bear just below the surface remembrance of a statement from the Rylands Library: "The importance of this fragment is quite out of proportion to its size, . . ." And yet it exists, considering all which could have destroyed it, against the odds. Thomas Ingmire's calligraphy shows the image of the actual fragment, then the restored page, then the English translation of the restored page in flaps that extend the pages in order to allow for the missing text. The calligrapher has added gold tooling to the title and half-title pages." The book is printed letterpress on Frankfurt Cream paper and bound in heavy brown handmade paper from Cave Paper with cream paper spine label. In fine condition. 8.25 x 6.25 inches. Unpaginated [40 pages]. PRI/022515. (Inventory #: 28032)
$275.00 add to cart or Buy Direct from
Kelmscott Bookshop
Share this item

Bibliotheca Anti-Quakeriana; or, a Catalogue of Books Adverse to the Society of Friends, Alphabetically Arranged; with Bibliographical Notices of the Authors, together with the Answers Which have been Given to some of them by Friends and Others

London : Joseph Smith , 1873
(click for more details about Bibliotheca Anti-Quakeriana; or, a Catalogue of Books Adverse to the Society of Friends, Alphabetically Arranged; with Bibliographical Notices of the Authors, together with the Answers Which have been Given to some of them by Friends and Others)

by [Books on Books]