[Theatrical Window Card Poster for:] REQUIEM FOR A NUN 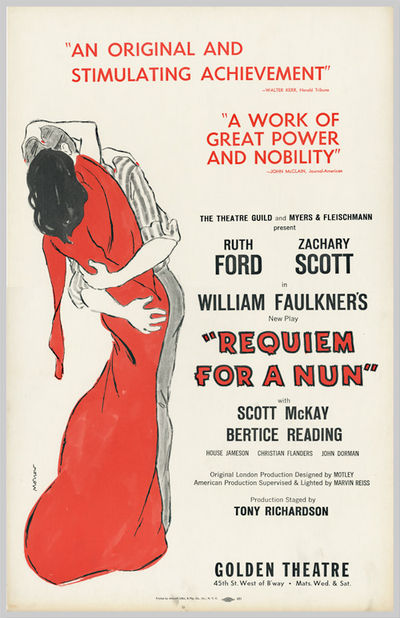 by Faulkner, William (sourcework & adap), and Ruth Ford [adap]
New York: The Theatre Guild / Golden Theatre, 1959. Folio (22 x 14") highly pictorial window card, printed on recto only of stiff card. Artwork by noted Broadway poster artist Tom Morrow. Lightly tanned at extreme edges with a minor dust mark at lower edge, else near fine. A window card promoting the short-lived Broadway run of Faulkner's sole venture into commercial theatre, produced at the John Golden Theatre, directed by Tony Richardson and adapted by Faulkner and Ruth Ford from Faulkner's novel. Graphically strong, and like most Broadway posters of this era, very scarce even before factoring in the brevity of this play's American run of 43 performances. The poster simply credits this as William Faulkner's "Requiem for a Nun," with no reference to the writing contribution of Ruth Ford, who also starred in the role of the former Temple Drake. In addition to Ford, the play featured Zachary Scott, Beatrice Reading, and Scott McKay, among others. Ms. Reading was nominated for a Tony in the category of Featured Actress in a Play for her portrayal of the character Nancy Mannigoe. (Inventory #: WRCLIT73387)
$850.00 add to cart or Buy Direct from
William Reese Co. - Literature
Share this item

DEATH IN THE AFTERNOON

FOR WHOM THE BELL TOLLS

New York : Scribner's Sons , 1940
(click for more details about FOR WHOM THE BELL TOLLS)
View all from this seller>