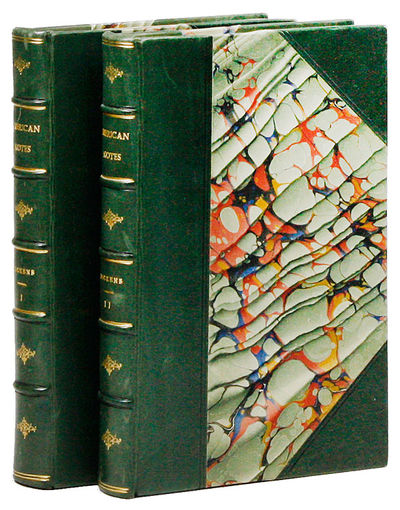 by DICKENS, Charles
London: Chapman and Hall, 1842. First Edition. First state, with verso of contents leaf incorrectly numbered "xvi" instead of "x". Two octavo volumes (20cm); bound in recent half green calf and marbled boards, spines in six compartments with raised bands, titling and decorations stamped in gilt; top edges gilt; [x], [2], 308; [viii], 306pp; lacking ad leaf. Text edges slightly tanned; faint moisture staining to upper right corners of Vol.2; clean otherwise, and free of foxing - about Fine. American Notes is largely based on Dickens's letters to John Forster, Daniel Maclise, Beard, Mitton and Fontblanque. He sailed from Liverpool on 3 January 1842 and visited numerous cities in the United States and Canada, including Boston, New York, Philadelphia, Richmond, St. Louis, Montreal, and Quebec, before leaving for England from New York City on June 7. It was an exhausting trip, and Dickens was especially tired of the often virulent reactions to his support of international copyright laws. His dissolution is apparent his criticisms of slavery, the American press, and the sanitary conditions of American cities. (Inventory #: 21839)
$750.00 add to cart or Buy Direct from
Lorne Bair Rare Books
Share this item

New York : Alfred A. Knopf , 1942
(click for more details about The High Window)
View all from this seller>