Printed circular signed in autograph ink by naval storekeeper George Bates printing a statement by John Barney in settlement of a slander case against Barney. 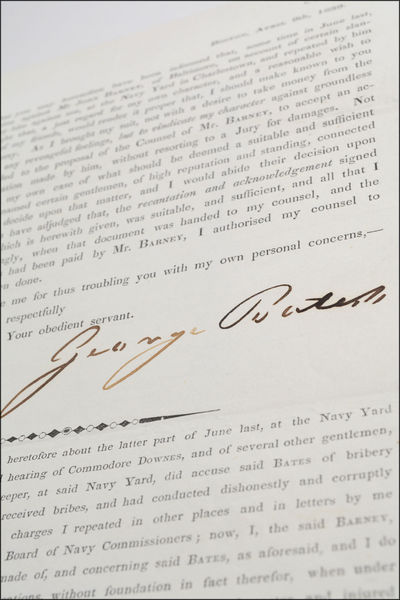 by [Nautical]. [Slander]. Bates, George.
[Boston n. p. 1839]. First edition.. Old folds, some light dust-soiling and toning; in very good condition.. 1 page on a bifolium, approx. 10 x 7.75 inches. Signed in ink by George Bates. Bates's statement dated in type Boston, April 9, 1839; Bates explains that his legal suit against John Barney has been settled, with Barney agreeing to publish the attached recantation and pay all legal costs. Barney's statement, dated in type Baltimore, March 28, 1839, notes "about the latter part of June last, at the Navy Yard in Charlestown, Massachusetts, in the presence and hearing of Commodore Downes, and of several other gentlemen, in speaking of Dr. George Bates, Naval Storekeeper, at said Navy Yard, did accuse said Bates of bribery and corruption, and did aver, that said Bates had received bribes, and had conducted dishonestly and corruptly in his said office for a long space of time, which charges I repeated in other places and in letters by me addressed to the Secretary of the Navy. . . . I do avow and declare, that I made and uttered the said accusations, without foundation in fact therefor, when under the influence of great mental excitement. . . ." Bates was a longtime storekeeper at the Charlestown Navy Yard (one of the oldest in America) and the whiff of corruption around naval procurement might perhaps be considered almost proverbial--though Bates was by legal acclaim noted as something of a paragon. Contemporary docketing in pencil on the verso. (Inventory #: 16705)
$125.00 add to cart or Buy Direct from
Garrett Scott, Bookseller
Share this item

Autobiography of a Sex Thief.

[New York] : Lustrum Press , (1984)
(click for more details about Autobiography of a Sex Thief.)
View all from this seller>