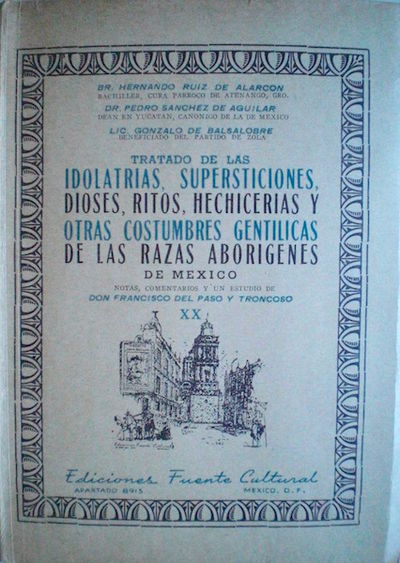 by Ruiz de Alarcon, Hernando, et al.
Mexico City: Ediciones Fuente Cultural/ Libreria Navarro, 1953. Second edition. Octavo, 22.5 x 16.5cm, pp 477. Limited to 400 copies. This is the second edition after the first, published from the original manuscript of 1629 and editied with notes and commentary by the great Mexican scholar Sr. Paso del Troncoso, which appeared as one of the Anales del Museo Nacional. However the publisher notes that important additions and indices have been added to this new edition. The author - his dates are unknown - was born in Taxco, was the brother of the famous Spanish Golden Age dramatist Juan Ruiz de Alarcon, but unlike his brother, after graduating from the University of Mexico, remained in Mexico as a parish priest. He gathered together a large amount of the customs and, particularly, the religious beliefs and practices of the indigenous people with whom he came in contact. The Diccionario Porrua speaks extremely highly of this book, which it claims to be as important in respect to the indigenous religious practice as the much more well-known work by Fr. Sahagun. The book is in wrappers with dust-wrapper as well, but is a sewn binding: paper is of good quality, with a profusion of wood-cuts as head- and tail-pieces throughout the text: because of the limited print run it is rather uncommon on the market. This publishing house excels in an esthetic of Mexicanismo and this book is certainly no exception. A fine copy. (Inventory #: 7347)
$150.00 add to cart Available from Plaza Books
Share this item