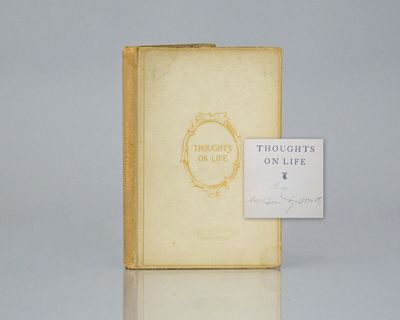 by Watts, Dickson G
Cambridge, MA: The Riverside Press, 1899. First edition. Small octavo, original cloth. Signed by Dickson G. Watts on the title page. In good condition, with some wear to the cloth.This is the first Watts signature we have encountered. Rare. Dickson G. Watts was president of The New York Cotton Exchange in the late 19th century, which was then one of the greatest arenas of speculation in America. Thoughts on Life are short aphorisms of timeless wisdom. The original source for classic market wisdom such as: "Make your theories fit your facts, not your facts your theories." "Look after the principal; the interest will look after itself." "If a speculation keeps you awake at night, sell down to the sleeping point." This book is a must for any reader of classic investing wisdom. (Inventory #: 4486)
$3,800.00 add to cart or Buy Direct from
Raptis Rare Books
Share this item