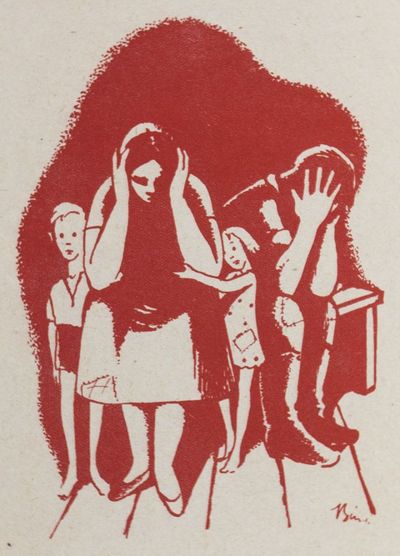 by Magyarorszagi Szociáldemokrata Párt, MSZDP (Hungarian Social Democratic Party)
Budapest: Forrás-nyomda, 1947. First edition. Softcover. g to vg. Octavo. Unpaginated. [20]pp. Original red wrappers, with white lettering on front cover. Fully illustrated propaganda brochure of the Hungarian Social Democratic Party for the upcoming 1947 Parliamentary elections.* Each double page shows the contrast between the recent past (war, and pre-WWII) and the prosperous society that the Social Democratic Party is promising after it wins the elections. The "before" drawings are in b/w (except for the first one which is in red and white), while the "after" drawings are in red, black and white. Each of the 16 drawings is captioned. Moderate shelf wear and age-toning. Text in Hungarian. Wrappers in overall good, interior in good+ to very good condition. * Parliamentary elections, which later became infamously the "blue-ballot" elections, were held in Hungary on 31 August 1947. The Hungarian Communist Party, which had lost the previous election, consolidated its power in the interim using salami tactics. This fact, combined with the weakening of the opposition and a revised electoral law, led to further Communist gains. It was Hungary's last remotely competitive election before 1990. (Inventory #: 39163)
$450.00 add to cart or Buy Direct from
Eric Chaim Kline Bookseller
Share this item