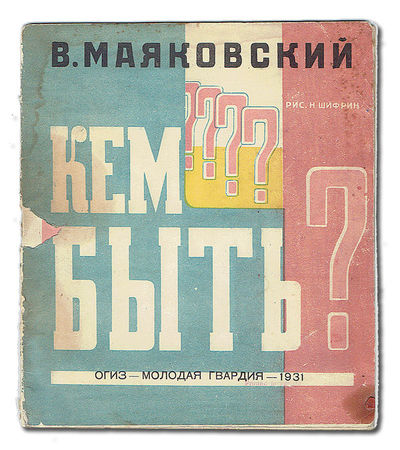 by MAYAKOVSKY, Vladimir (text); SHIFRIN, Nisson Abramovich (illustrations)
[Moscow]: OGIZ - Molodaia Gvardiia, 1931. Third Edition. Octavo (22cm); four-color printed wrappers, stapled; [20pp]; illus; text is in Russian. Overall wear to extremities, with foxing, dustiness, and occasional soil to wrappers; triangular chip at mid-spine, affecting upper left corner of 'B'; text and illustrations relatively clean throughout; Good, complete copy. One of the last children's books by Vladimir Mayakovsky - poet, playwright, actor, and among the foremost representatives of early 20th-century Russian Futurism. Kem Byt'? is presented in the form of staggered verse, presenting children in a variety of professions, and providing encouragement that each role is important to the good of the country. This edition published shortly after his death in 1930, and as with most of the earliest editions, is illustrated in colors throughout by Nisson Abramovich Shifrin, the principal stage designer at the Central Theater of the Soviet Army and Moscow Art Theater. All of the pre-WWII editions of this title are scarce, this being the earliest edition available in the trade (2014); OCLC shows 6 holdings for this edition (NYPL, Harvard, U.Chicago, McGill, Riverside PL, and N.Illinois University). (Inventory #: 20991)
$750.00 add to cart or Buy Direct from
Lorne Bair Rare Books
Share this item