The Rise of Dennis Hathnaught: Life of the Common People Across the Ages as Set Down in the Great Books of the World 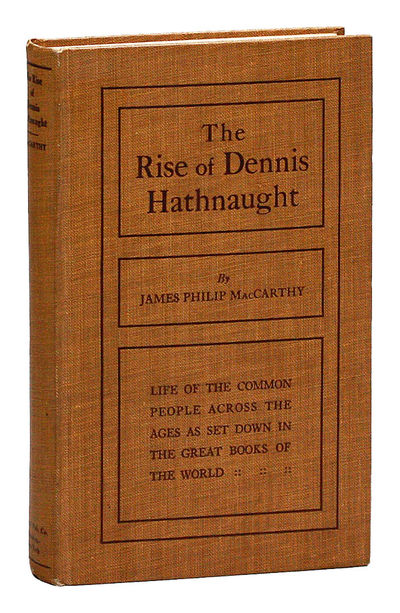 by [RADICAL AND PROLETARIAN LITERATURE] MACCARTHY, James Philip
Brooklyn: Writers' Publishing Co, [1915]. First Edition of 1,000 Printed in September, 1915," octavo (19.25cm.); original brown cloth double ruled and printed in dark brown; [10],240,[4](ads)pp. Fine. Presentation copy, inscribed and signed by the author and his wife Jessie to noted Americana collector Dr. William C. Braislin, with author's own photographically illustrated bookplate on front pastedown. Popular history of the laboring class, here personified in the figure of "Dennis Hathnaught." Composed within a loosely fictional framework by MacCarthy in order that the presumably working-class reader, "may be taught to judge more intelligently of his own time and its problems if he has some idea of past times and their institutions." The "history" begins with "Dennis Hathnaught's Lowly Origin; His Biological Ancestry; Primitive Man; Ancient Contempt for Labour, Effects of Evolution and Suggestion of Human Progress," and proceeds through the various eras of English-speaking Hathnaughts, starting with the Saxons, and progressing through the Middle Ages, 16th and 17th century England, and the Industrial Revolution. Interspersed with chapters on "Fritz Hathnaught," "Jacques Bonhomme," and the "Slavic Hathnaughts, Ivan and Michael. (Inventory #: 21273)
$250.00 add to cart or Buy Direct from
Lorne Bair Rare Books
Share this item

New York : Alfred A. Knopf , 1942
(click for more details about The High Window)

The Lady in the Lake

New York : Alfred A. Knopf , 1943
(click for more details about The Lady in the Lake)
View all from this seller>