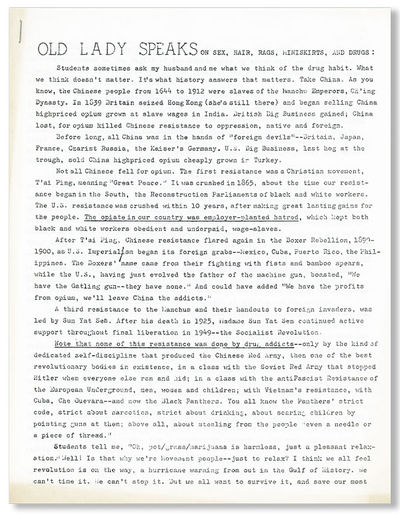 by [ROGERS, Elizabeth S. Cousins]
[New Orleans: Elizabeth S. Cousins Rogers, 1970]. Corner-stapled, mimeographed sheets; [4]pp. Slight toning to margins, else Near Fine. Elizabeth Schlosser Cousins Rogers (1891-1983), along with her husband, the union organizer Walter Rogers, was a long-time fixture in New Orleans' Jackson Square, where beginning as early as the 1950s the couple were known for their vocal espousal of radical leftist politics (they were both long-time members of the Communist Party) and for handing out copies of their myriad hand-produced political leaflets on subjects ranging from international politics to the lack of adequate city services in their adopted neighborhood, the majority African-American Lower 9th Ward. The Rogers remained active well into their eighties, producing their final published book ("Songs for the Sidewalk") in 1981, the year of Walter's death.

The current leaflet, produced at the height of the hippie counterculture, addresses what Rogers perceives as the strengths and failings of the movement, including its preoccupation with drugs ("... I wonder - IS marijuana so harmless?"...); sexual promiscuity ("...unbridled individual indulgence creates no beautiful people: only helpless addicts, theives [sic], Green Berets, Song My murderers..."); and mini-skirts ("There's something fine about the young woman erect and confident, showing as much of her leg as she likes...there's only one thing I hope I won't live to see: those strong beautiful young legs lying muddy and bloody in ditches under the guns and sneers of Fascism...").

1 copy only in OCLC (U.Virginia), though we note both Tamiment (NYU) and Amistad Research Center hold archives of Rogers correspondence and ephemera. (Inventory #: 25714)
$75.00 add to cart or Buy Direct from
Lorne Bair Rare Books
Share this item

The Slave: or Memoirs of Archy Moore

Boston : Anti-Slavery Office , 1846
(click for more details about The Slave: or Memoirs of Archy Moore)
View all from this seller>