Marlborough: His Life and Times, a full set of British first editions, inscribed and dated in Volume I to Churchill's godson the day after publication 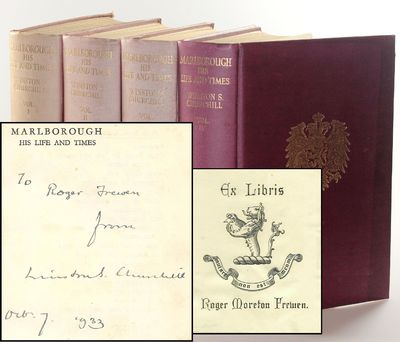 by Winston S. Churchill
London: George G. Harrap & Co. Ltd., 1933. First edition, first printing. Hardcover. This full set of four British first edition, first printings, is inscribed to Churchill's godson. The five-line inked inscription on the Volume I first free endpaper reads: "To | Roger Frewen | from | Winston S. Churchill | Oct. 7. 1933". The inscription is dated the day after publication, in the year that Churchill's godson nearly lost his life. All four volumes bear the bookplate of Roger Moreton Frewen affixed to the front pastedown. THE ASSOCIATION: Roger d'Hauteville Moreton Frewen (1914-1972) was the son of Churchill's first cousin, Hugh Frewen, and grandson of Churchill's Aunt Clara, his mother's eldest sister. Hugh's childhood was marked by visits with his Churchill and Leslie cousins, including Winston, who was nine years older than Hugh. Roger was born during the First World War while his father was serving on the front and his godfather, Winston, was First Lord of the Admiralty. Roger was born in London, educated in Switzerland and Cambridge. A near-fatal car accident in 1933 and tuberculosis contracted during recovery nearly killed Roger and permanently impaired his health. Churchill inscribed Volume I of this set for his godson in 1933. Despite his health, Roger joined the Foreign & Commonwealth Office in 1938. Posted to the British Embassy in Berne during WWII, Roger listened to German and Italian military signals and reported information to Britain, drove lorries with military supplies through occupied France, and rescued escaped prisoners of war by crossing into Germany and Italy and bringing them to safety in Switzerland. Driven by income needs as his family grew, in the decades after the war Roger had careers in finance and real estate. Roger's son, Jonathan, from whom these books come to us, recalls that Roger excelled at mathematics and languages and was "a kind man, an amusing raconteur... and a good Father." Jonathan also recalls that "Winston was an excellent godparent" who "never forgot a birthday or Christmas, no matter his duties." THE EDITION: Winston Churchill originally considered the idea of this monumental biography of his great ancestor, the first Duke of Marlborough, in 1898, returning to it in earnest in 1928. Ten years of research and writing produced the most substantial published work of Churchill's 1930s "wilderness years." The books measure 9.25 x 6.25 x 2 inches, each bound in plum cloth with beveled edges, the Marlborough coat of arms gilt on the front cover, and a gilt top edge, and profuse illustrations within. Unfortunately, the plum cloth bindings of Volumes I-III proved highly susceptible to sun fading. (A different, more fade-resistant dye was used in Volume IV.) CONDITION: This inscribed set is in very good condition overall. All four volumes are first printing. The inscribed Volume I retains a square and tight binding, with the usual spine fading, corner wear, and a bit of staining to the rear cover. The contents remain tight with modest spotting substantially confined to the first and final few pages and the fore and bottom edges. The balance of the set features tight bindings with only minor wear to extremities. Volumes II & III are spine faded and Volume IV has a line of differential color at the front cover fore edge. The contents of Volumes II-IV remain bright with spotting primarily confined to the first and final pages and fore and bottom edges. In addition to Roger Frewen's bookplates, Volumes III and IV have gift inscriptions on the first free endpaper - each to the same recipient and dated "Christmas" in the year of publication. All four bookplates are identified by Roger's son as those used by his father prior to the Second World War. This set may be kept in the original bindings and fitted with custom preservation cases or finely rebound. A skilled binder would recover the original bookplates from the pastedowns. We are happy to provide referrals. Bibliographic reference: Cohen A97.2(I-IV).a, Woods/ICS A40(aa), Langworth p.166 (Inventory #: 003274)
$7,875.00 add to cart or Buy Direct from
Share this item