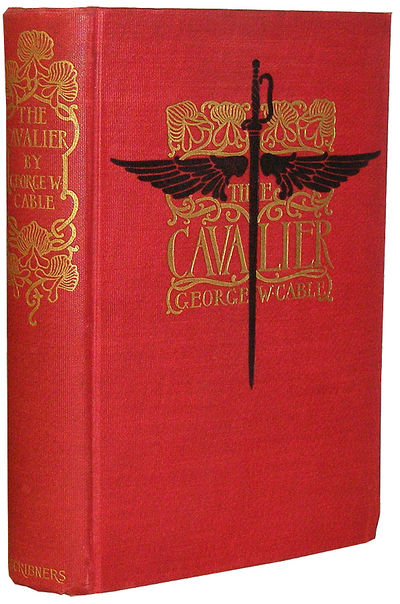 by Cable, George W.
New York: Charles Scribner's Sons, 1901 Illustrated by Howard Chandler Christy. First edition, printing two. Publisher's decorative red cloth designed by Margaret Armstrong, with an illustration to the front board of a winged sword in black, flower and vine decorations in gilt, lettered in gilt. About fine, with a slight lean to the spine, former owner's inscription to a front flyleaf, else fine. A beautiful copy. Gullans and Espey 56. BAL 2368 The Cavalier is a historical romance novel set in the Antebellum American South. Cable, a native of New Orleans, was an important Southern author who is noted for his realistic portrayal of Creole life in his home state of Louisiana. An abolitionist with extreme regional pride, Cable was, as The Encyclopedia of Southern Culture notes, "unable to reconcile his love for the South with his abhorrence of slavery and racism;" accordingly, his works vary between supporting the reformation of the New South without racial inequality and nostalgia for the idyllic South of the past. Margaret Armstrong (1867-1944) was a renowned artist and designer in the late 19th century. Along with her contemporaries Sarah Wyman Whitman (1824-1904) and Alice Cordelia Morse (1863-1961), Armstrong is an example of how the Arts and Crafts and Aesthetic movements at the time provided new opportunities for women's employment in the arts. Raised in New York City, Armstrong first became interested in art and design in her early childhood and started designing book covers by 1890. After beginning her career with A. C. McClurg Publishing Company, Armstrong worked primarily for Scribner's and specifically focused on the works of a few authors, including Henry Van Dyke. Armstrong's style, which was influenced by the floral patterns of Art Nouveau and the lines and shapes that are characteristic of the Arts and Crafts movement, made her bindings distinct, which was useful in terms of advertisement and branding an author's works as a unique set. After 1913, Armstrong produced few publisher's book covers, choosing instead to focus on writing and illustrating her own books.. 1st Edition. Hard Cover. Fine. Illus. by Armstrong, Margaret. (Inventory #: GWC001)
$90.00 add to cart or Buy Direct from
B & B Rare Books
Share this item