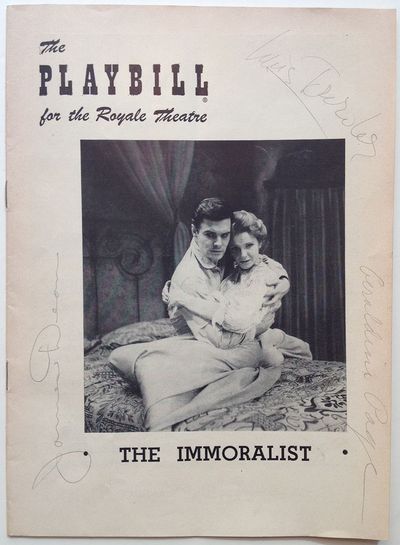 by DEAN, James (1931 - 1955)
New York, 1954. paperback. near fine. Exceedingly rare and possibly unique signed Playbill for James Dean's appearance in the Broadway play "The Immoralist" at the Royale Theatre, February 1954. Signed "James Dean" on the front cover, along with "Geraldine Page" and "Louis Jourdan." The Playbill grades near fine condition, retaining much of its milk white surface with no rusting at the staples. The signatures are all executed in pencil with excellent contrast. Accompanied by the even rarer ticket envelope from the Royale Theatre box office containing the original ticket stub for the February 6, 1954 matinee performance. The Balcony seat (Row F Seat 5) cost the attendee $1.80. Note: "The Immoralist" opened for New York previews on February 6, 1954 at the Royale Theatre, a most unusual circumstance at the time; audiences could attend, but critics were not invited. Dean's behavior was erratic and several members of the cast described him as a distraction. On February 7th the producers of the play contacted playwright Paul Osborne. He was working on an adaption of John Steinbeck's "East of Eden" and called director Elia Kazan to recommend the fellow playing the Arab houseboy as a possibility for the leading role. Knowing Dean's work, Kazan jumped at the idea and Dean tendered his resignation the next day -- which happened to be opening night -- before the reviews came in. In essence, Dean appeared in only a handful of preview performances and in the opening night presentation, and then he was gone. This is without doubt one of the most important James Dean items to come to market in the last 25 years. American actor best known for his roles in three 1950s screen classics:" East of Eden," "Rebel Without A Cause," and "Giant." His untimely death in a high-speed car crash elevated him to the status of Hollywood legend. (Inventory #: 256972)
$7,000.00 add to cart or Buy Direct from
Argosy Book Store
Share this item