A Description of the East, and Some Other Countries 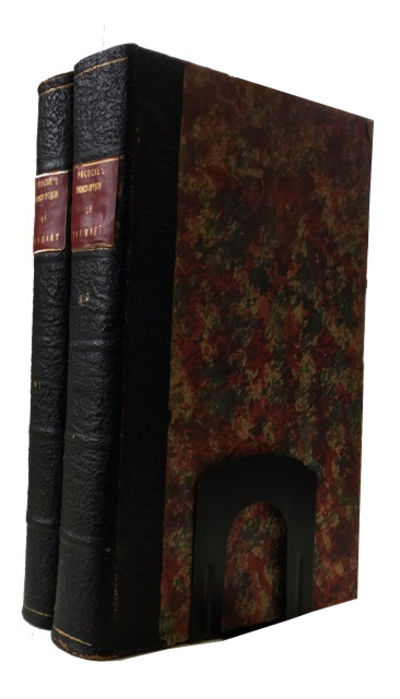 by Pococke, Richard, 1704-1765
London: Printed for the Author by W. Bowyer; and sold by J. and P. Knapton [and many others], 1745. Hardcover. Fair. 3 parts (with separate title-pages) bound in 2 vols. 176 (of 178) plates and maps, [16], 310, xi, [1], 268, vii, [1], 308p. Modern (20th century), inexpensive quarterbinding (oddly patterned paper-covered boards backed in black leather). Folio (42cm.) Poorly-printed red title labels on backstrips. Lacks 2 plates (numbers 52 and 53) in Vol. I. Outer leaves browned and stiffly bound. Extensive visible but mostly light staining causing pages to be somewhat rippled. Pococke, a Christian cleric (Church of Ireland), traveled to Egypt, the Holy Land and various others parts of the Middle East as well as Greece from 1737-1740. He also traveled extensively in Europe on his way home over the next two years; those travels are described in lesser detail (pages 197-276 of Vol. II, Part II. Pococke did put a nose on his illustration of the Sphinx and had some other inaccuracies. Despite such errors, this is generally regarded as one of the best early accounts of travel in the Middle East. This is not the finest of copies, but it is a serviceable copy of the first edition which is usually much more expensive. The binding appears to be one of those inexpensive and far from handsome bindings found on copies of folio-sized books purchased from some of the Fourth Avenue booksellers in New York in the 1950s and 1960s. (Inventory #: 84039)
$2,500.00 add to cart or Buy Direct from McBlain Books
Share this item