Signs and Wonders in Rabbath-Ammon: Being an Account of Divine Visitations in Amman, Trans-Jordan 1933. [cover title] 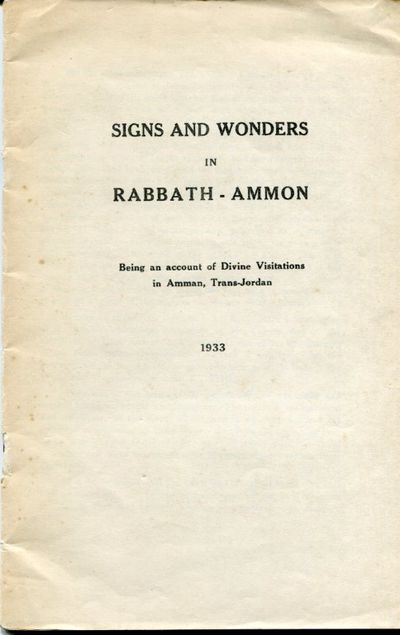 by Kawar, Salim, editor and translator
[Amman?], 1973. Paperback. Good. 24, 19p. Original wrapper. 24cm. Relatively light foxing and edge-wear. Former owner's name. Printed statement inside back cover: Copies can be obtained ... from Mr. S. B. Kawar P. O. Box 1677 Amman, Jordan. The first part of this item was edited and translated from the Arabic by "Saleem" Kawar, probably in the 1930s and covered manifestations of the Spirit through Kawar's mother which occurred in the first quarter of 1933. The second part, which appears to have been edited and translated by Kawar 40 years later, concerns messages from the same Spirit which were also manifested through Kawar's mother between August 26 and October 22 in 1933 and not previously translated into English. Kawar's mother is identified as Hanneh Elias Aghaby, a Christian woman living in Amman who was the wife of Bashara Mutanis Kawar. (Inventory #: 84145)
$85.00 add to cart or Buy Direct from McBlain Books
Share this item