Uncle Tom's Cabin: or, Life Among The Lowly 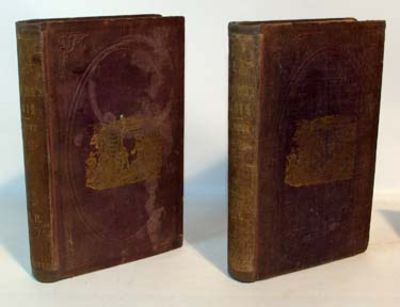 by Stowe, Harriet Beecher
Boston: John P. Jewett & Company, 1852. First Edition . First Printing, First Issue Both small octavo volumes of this two volume set are in very good+ condition which have been rebacked with new end sheets preserving the original light brown cloth covered boards and back strips with the blind embossing around the edges of each board with a gilt embossing in the center of each front board with gilt text and blind embossing on the spines. A previous owner has written "First Edition" in ink on the first free end page of volume I. A possible second previous owner has written her name in pencil on the second free end page over a section of a book seller's catalog showing a price of $25.00 for two volumes of the first edition of this title. Both volumes are from the first printing with Hobart & Robbins shown on the copyright pages. And, both volumes contain all the issue points called for in BAL. The first printing of this landmark book occurred on March 20, 1852. It was sold out in a matter of days. Per BAL by April 1, 1852 a second printing of ten thousand copies had been produced which was followed by a third printing of fifty thousand copies which sold out in only 8 weeks by mid-May of 1852. An extremely handsome, matched set of one of the most important books of the 19th century. Both volumes are illustrated with a frontispiece and three, wood engraved plates in each volume by Hammatt Billings. (BAL 19343; Printing and The Mind of Man, 332) (Inventory #: TB27489)
$4,000.00 add to cart Available from
Town's End Books
Share this item

The Celebrated Jumping Frog of Calaveras County And Other Sketches

n.p. : Westvaco, West Virginia Pulp and Paper Company , 1959
(click for more details about The Celebrated Jumping Frog of Calaveras County And Other Sketches)
View all from this seller>