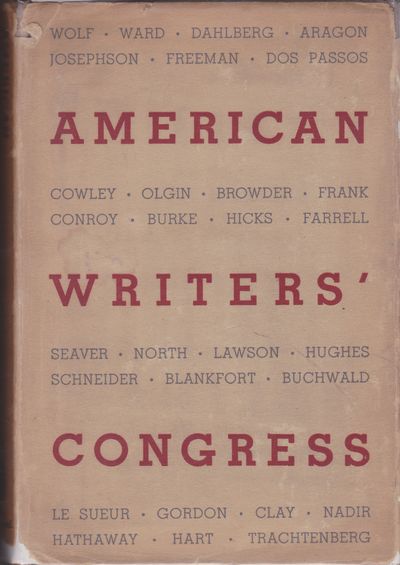 by Hart, Henry (Editor)
Small Octavo (7 7/8 x 5 1/2 inches; 202 x 137 mm), viii, 9-192 pages, in publisher's original gray cloth, with a printed dust jacket.
An important compilation of papers and proceedings at the historic first Writers' Congress of 1935. Authors included Malcolm Cowley, John Dos Passos, Louis Aragon, Waldo Frank, Granville Hicks, and Langston Hughes, among many others. Much of the discussion dealt with proletarian literature; the role of the writer in the Soviet Union, and the fight against Fascism. These were all left-wing writers, many of them associated with the Communist Party; the party's publishing arm issued this edition.

Given the close association of the congress with the Communist Party, it's not surprising to find CPUSA chief Earl Browder turning up in the proceedings. And Alexander Trachtenberg, who ran the party's International Publishers, gave an interesting talk on publishing revolutionary writers. Scarce in commerce.

CONDITION: Some sunning and soiling to boards, top edge dusty. Internally, pages age-toned but clean and unmarked. The unclipped dust jacket is heavily darkened and has some chips and tears along the edges, especially at the spine. A few splits in the flaps where they meet the panels. About Very Good overall. (Inventory #: 671)
$125.00 add to cart Available from Le Bookiniste
Share this item

[Anti-FDR] If You Do Not Want Senator Wagner's State Medicine Plan And If You Would Preserve Freedom for the Professions and All Enterprise Now Is the Time to Tell Your Representatives How You Wish Them to Speak for You in the Next Congress.

by Pettengill, Samuel B.

New York : National Committee to Uphold Constitutional Government , [ca. 1940]
(click for more details about [Anti-FDR] If You Do Not Want Senator Wagner's State Medicine Plan And If You Would Preserve Freedom for the Professions and All Enterprise Now Is the Time to Tell Your Representatives How You Wish Them to Speak for You in the Next Congress.)

[ANTIWAR] Calling for a Crusade

[Chicago] : Bulletin of the Atomic Scientists , [1947]
(click for more details about [ANTIWAR] Calling for a Crusade)
View all from this seller>