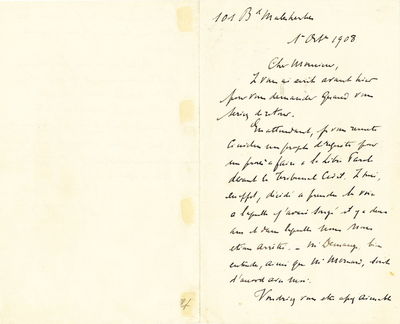 by DREYFUS, ALFRED
Letters by Dreyfus referring to his famous legal case rarely become available. In our letter, written two years after he was exonerated, Alfred Dreyfus writes to an unknown recipient about suing the French newspaper, "La Libre Parole," for refusing to correct statements regarding his innocence. Dreyfus references his trial lawyers, Henri Mornard and Edgar Demange as well as Henri Ditte, President of the Tribunal of First Instance of the Seine, a civil court. Dreyfus begins, "I wrote you yesterday to ask when you would return. Meanwhile, I am sending herewith a draft request [not included] for a trial to do with la Libre parole before the Civil Court...I have made up my mind to take the direction that I had thought of two years ago and on which we had decided on. - M. Demange, of course, M. Mornard agree with me. Would you please be kind enough by asking of President [Henri] Ditte an expiation, the closest possible. Please note that it will be necessary to notify within at least three months, about the actes d'interruptifs de prescription. This precaution is absolutely necessary even though we are going before the Civil Court and not before the Court of Assizes...." He signs, "A. Dreyfus." "La Libre Parole," was a virulently anti-Semitic publication founded in 1892. The day following Dreyfus's conviction, "La Libre Parole" headlined a call for Jews to leave France, "Out of France, Jews. France for the French!" Dreyfus was ultimately found innocent in 1906, having been framed by fellow officers of the army. "La Libre Parole" refused to correct false statements regarding the Court of Cessation decision of July 12, 1906, fully exonerating Dreyfus. Between Dreyfus's initial conviction in 1894 and full exoneration in 1906, the officer who actually committed treason by spying for the German government, Major Ferdinand Walsin-Esterhazy, was put on trial twice. Esterhazy's first trial in 1898 resulted in an acquittal. Emile Zola wrote his famous, "J'Accuse" open letter to the French President. Zola's letter, published in the newspaper "L'Aurore," accused the French government of anti-Semitism , judicial errors and lack of serious evidence in the case against Dreyfus. Zola, himself, was accused of libel and to avoid imprisonment, fled to England. He returned home in June 1899. On June 3, 1899, the Court of Appeals overturned the guilty verdict against Dreyfus, however, despite overwhelming evidence of innocence, a military court again found Dreyfus guilty of the same charge of treason. French president Emile Loubert pardoned Dreyfus on Sept. 19, 1899. Seven years later, in 1906, a military commission finally fully absolved Alfred Dreyfus. "La Libre Parole," ceased publication in June 1924. Autograph (Inventory #: 4080)
$4,700.00 add to cart or Buy Direct from
Schulson Autographs
Share this item


(click for more details about Ginsberg photographed at a party, ca 1970,)