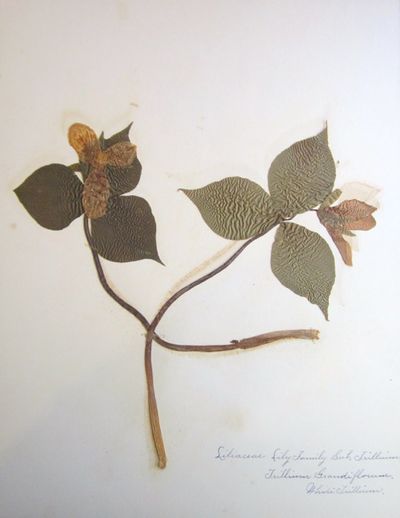 by [botanical specimens]; Gordon, Nettie E.
Mansfield, Pennsylvania, 1890. Hardcover. Very Good+. A nice group of 15 botanical specimens mounted (with tiny, nearly invisible tape) to the recto of loose cardstock leaves (280x360mm), each one identified (a contemporary hand, pretty cursive, black ink) by its Latin and common English names. Originally housed between two stitched leaves, now separated, but preserving their careful creator's name, "Nettie E. Gordon / Manfield, Pa. / May 30, 1890 / S.N.S." (in the same hand). Condition is generally very good or better; a few of the specimens are broken, but tidily so, with potential for repair. Displays nicely.

Manuscript map of Deposit and Bennettsville