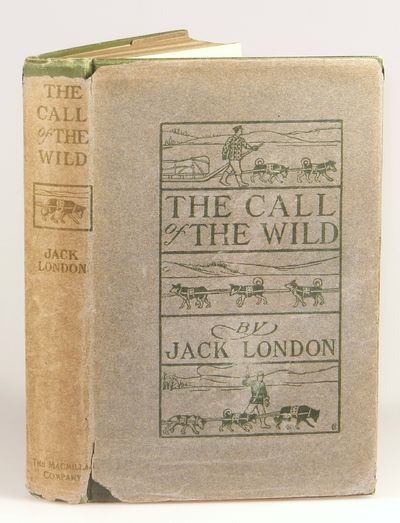 by Jack London
New York: The Macmillan Company, 1903. First edition, first printing. Hardcover. Philip R. Goodwin & Charles Livingston Bull. This is a jacketed first edition of perhaps the most iconic work of an archetypally American author and giant of early twentieth century literature. Though Jack London had experienced some preceding success as a writer, it was The Call of the Wild, written in his mid-twenties, that brought him fame. London's tale of a pampered California dog who finds his strength, his place, and the brutal gift of his freedom in a savage, primal North met with immediate popularity and critical acclaim. The first printing quickly sold out and the story has since seen a host of successive editions, remaining continuously in print. London's story occupies a pinnacle amid the remarkably prolific output of his short, strenuous, and celebrated literary life. The story's hero, Buck, ranks among the most provocative and best known animal protagonists in literature. To the virtues of the story itself, the first edition lends a striking aesthetic. The distinctive illustrated binding features vertically scored olive cloth with a classic London dog sled scene in three panels on the front cover in red, white, and black, with gilt print on spine and front cover, and a color illustration of the lead sled dog from the front cover repeated on the spine. Within, the book is profusely illustrated in color by Philip R. Goodwin and Charles Livingston Bull, bound with illustrated endpapers, and printed with generous margins (its thirty two thousand words, more novella-length than novel, nonetheless fill 231 pages). The heavy gray paper dust jacket repeats the front cover illustrations and spine illustrations in dark green print. This copy is very good plus in an original dust jacket. The binding remains tight and bright with sharp corners. Minor wear is primarily confined to extremities. The typical abrasion loss of the white "snow" on the front cover and spine is modest. We note a modest forward lean to the binding. The contents remain bright and clean with a crisp feel. We find no previous ownership marks or spotting. The illustrated endpapers, frontispiece tissue guard, all illustrations, and the two-page Macmillan advertisement bound in at the rear are all intact. The untrimmed fore edges and bottom edges remain exceptionally clean with only slight age-toning, and the top edge gilt is bright. Searching for internal flaws, we note only faint finger smudges at the blank inner margin of page 15. The illustrated dust jacket remains clean with clearly legible print and only perhaps a hint of barely discernible color shift to the spine. The jacket has suffered no repair or reinforcement. It bears unmistakable association with the first edition in the form of color ink from the front cover illustration that has transferred to the front panel verso of the dust jacket. We note chip losses at the spine heel to a maximum .5 inch depth, a .25 inch deep strip loss at the spine head, modest loss to the corners, and fractional wear to the edges and front flap fold. Losses to spine extremities do not impact either title or publisher print. The dust jacket is protected in a removable, archival quality clear cover. References: BAL 11876, Woodbridge 19 (Inventory #: 003214)
$6,825.00 add to cart or Buy Direct from
Share this item

Marlborough: His Life and Times, a full set of British first editions, inscribed and dated in Volume I to Churchill's godson the day after publication

London : George G. Harrap & Co. Ltd. , 1933
(click for more details about Marlborough: His Life and Times, a full set of British first editions, inscribed and dated in Volume I to Churchill's godson the day after publication)
View all from this seller>