Now Exhibiting at the Hall. The Skeleton of this Gigantic Animal was Discovered in the Month of August last on the Farm of Mr. Nathaniel Brewster, in the Town of Newburgh, Orange Co. N.Y. . 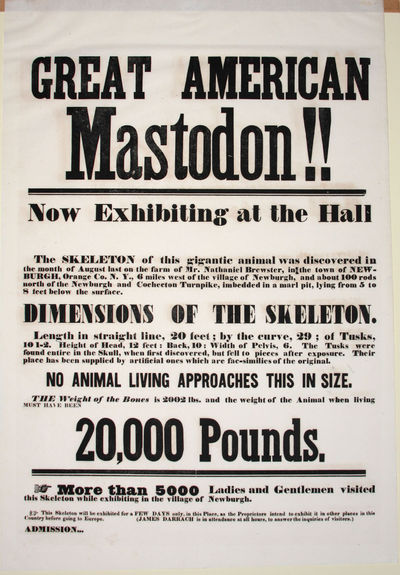 by [PALEONTOLOGY BROADSIDE]
[United States], 1846. No Binding. Near Fine. [64.5cm x 44.3cm; 25.5" x 17.5"]. Large broadside. Minor offset toning. A well-preserved example. Rare, boldly printed broadside announcing the early exhibition of one of the most famous discoveries in the history of American paleontology, that of the 'Warren Mastodon,' excavated in 1845 from a peat bog near Newburgh, New York, and since 1906 on display at the Museum of Natural History. The animal, which perished some 11,000 years ago, was an immediate sensation owing to its bones' near complete state of preservation and its status as the largest extinct species yet discovered in America (the first American dinosaur, a Hadrosaurus, was identified in Haddonfield, New Jersey, in 1858). Found on the farm of Nathaniel Brewster, the mastodon skeleton toured New England until it came to the attention of the surgeon Dr. John Collins Warren, who quickly purchased the beast, wrote a monograph about it (The Mastodon Giganteus of North America, Boston, John Wilson, 1852) and housed it in a small Boston Museum where it remained until it entered the Museum of Natural History. Today "the discovery of the mastodon skeleton, and Warren's serious treatment of it, mark the beginning of vertebrate paleontology in this country" (Expedition [AMNH gallery guide], p. 46). The broadside's exaggerated language and eye-catching typography are typical of printed advertising for mid-nineteenth-century spectacles. That it describes the exhibition generically as taking place "at the Hall" and that no firm admission price was printed suggest that the poster was designed for a traveling show of the sort where Dr. Warren first encountered the specimen. OCLC locates copies at the Library of Congress, Indiana University, the American Philosophical Society, and the American Antiquarian Society. (Inventory #: 5362)
$7,850.00 add to cart Available from Martayan Lan
Share this item
Martayan Lan, Inc.
Offered by