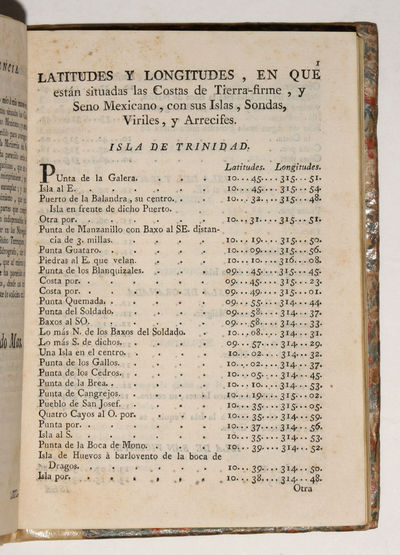 by SAN MARTÍN SUÁREZ, José de.
Barcelona: En la Imprenta de Bernardo Pla, 1784. Hardcover. Very Good. 4to [20 x 14.5 cm]. (3) ff., 80 pp., 31 pp., (1) p. errata. Quarter bound in vellum, marbled paper over boards, title stamped in black on spine. Minor staining, soiling and scuffing to spine and boards, minor staining on a few leaves, contemporary ownership inscription on front flyleaf ('Benedictus Villar'), internally quite clean. Very rare first complete edition (after the 1781 Havana edition) of an early Spanish-language pilot guide on the navigation of the Antilles, Caribbean, Tierra Firme, and Gulf of Mexico, including detailed information on the location of the reefs, sounds, bays, channels, ports, and inlets of the southern United States ranging from south Texas, to New Orleans, along the entire Florida peninsula, and as far north as Charleston. For his Tablas Modernas José de San Martín Suárez collected from the best published and unpublished sources latitude and longitude data for nearly 2000 precise locations across the Spanish Main with the expectation that such information might lead to safer piloting and to the construction of more accurate charts and maps of the region. That the volume was conceived as a military aid seems clear: As Naval Lieutenant and Piloto Mayór de Derotas of the Havana fleet, San Martín Suárez was helped by his First and Second Pilots and directed in this cartographic task by José Solano y Bote (1726-1806), Lieutenant General of the Royal Armada in Havana. Solano distinguished himself at the Siege of Pensacola in March of 1781 - the year that these Tablas Modernas were first published - by coming to the aid of Bernardo de Gálvez (1746-86) in the Spanish push to take British West Florida. The book is a fascinating record of the breadth of Spanish navigational intelligence at the time of this offensive, and the volume's rarity is perhaps best explained by the imperative to keep such information secret from British and other naval powers. Indeed, by the time this 1784 expanded Barcelona edition was published, Spanish control of the Gulf Coast had been formalized by the Treaty of Paris (1783), and new hostilities in the region were developing between The Untied States and Spain, this enmity only subsiding with Pinckney's Treaty in 1795. The Tablas Modernas, quite apart from its status as state secret, is fascinating as a record of the early Spanish and Native American toponyms of the American South (and elsewhere), many now vanished from memory: For every 'Misisipi' there is a 'Rio Cebet', for every 'Tampa' a 'Queynak'. San Martín Suárez's reckoning of longitude is technologically up to date, with some measurement apparently having been taken using a marine chronometer ('relox marino'). Sinibaldo Mas (1735-1806), a pilot and naval officer in Barcelona, praising the work's usefulness and lamenting its rarity (he could find but one copy of the 1781 Havana edition), expanded the text by the addition of extensive tables showing the length in nautical miles for degrees of latitude. In 1787 San Martín Suárez published a map ("Mapa y Plano del Seno Mexicano") incorporating many of the measurements from his Tablas Modernas. In 1826 Alexander von Humbolt remarked in this Essai politique sûr l'île de Cuba that in this map San Martín Suárez had provided an incorrect longitude for Havana, causing "a great number of shipwrecks" (p. xvii). OCLC locates just one U.S. copy of this 1784 edition, at the John Carter Brown Library. We have found only copy of the 1781 Havana copy: Universidad de la Laguna in Tenerife. *Medina BHA 5101; Palau 293078 (Inventory #: 5363)
$15,000.00 add to cart Available from Martayan Lan
Share this item
Martayan Lan, Inc.
Offered by