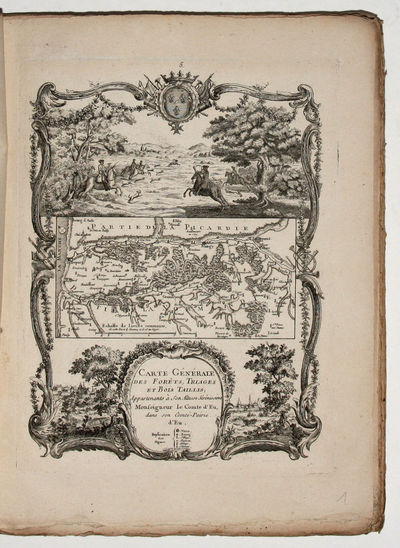 by ESTANCELIN, Louis
[France]: Gravée par Chambon, 1768. Soft cover. Very Good. 4to. [27.5 x 21.5 cm]. 40 numbered single-sided engraved plates. Bound in contemporary marbled paper. Very good overall. Only edition of this unusual volume surveying the wooded holdings of the Count of Eu, in Upper Normandy, a work comprised entirely of 40 fine, single-sided engravings, including a pictorial title page, 13 calligraphic plates of text, charts and tables, 5 botanical and industrial images, and 21 handsome, precise maps of the woods, copses and forests within the County of Pairie d'Eu. "This volume, evidently not intended for general sale, is a great rarity" (Thiébaud, 155). Produced in 1768 by Louis Estancelin, the region's "Lieutenant of Woods and Water", and engraved by Gobert-Denis Chambon, the Collection de Cartes is at once a lavish vanity project meant to flatter the aristocratic sensibilities of its dedicatee, the Comte d'Eu (at the time, Louis Charles de Bourbon), and a serious agrimensorial study, complete with meticulous references to the dimensions of individual parcels and to the ancient statutes appertaining to them. The volume is a painstaking analysis of the economic foundations of an estate, clothed in pre-Revolution finery. The Collection de Cartes concerns itself exclusively with "the woods of the County of Eu, which produce its principal revenue": although maps faithfully locate the city of Eu, its surroundings towns, villages, churches, and even individual farmhouses, these details appear as satellites to the forests. Nor are arable lands treated in detail, but instead individual tracts of woods are strikingly depicted in isolation, as if islands surrounded by an open sea. The more detailed maps indicate names of individual sub-parcels down to the size of a few acres and delineate the (rather formal) rectilinear alleys and carrefours that allowed one to traverse these woods. Estencelin adds to these designs extensive textual keys, tables calculating total holdings, and relevant statutes dating from the 1580s. Pictorial engravings supplement the volume's cartographic content, with one image depicting 37 different uses for wood (!). The renowned glassworks of Romesnil - situated within the forests of d'Eu and an industry requiring plentiful fuel - are given 3 plates, two of which depict glassblowers and their implements, the third delineating the façades of the five factory buildings: These technical depictions of industry share a spirit with the illustrations of Denis Diderot's Encyclopédie (1751-65) here localized to a specific place. A final engraving collects the Forest of Eu's 61 useful species of trees, shrubs, and bushes within an "Arbre Figuré", a single trunk sprouting 61 different leaves. Remarkably, the wooded regions of Eu, today known as the Forêt Domanial d'Eu, remain largely unchanged from the time they were depicted in this volume. * Manuel du Bibliographie Normand, pp. 435-36; Jules Thiébaud, Bibliographie des Ouvrages Français sur la Chasse, col. 155; OCLC (#54633671) lists American copies at Columbia, Harvard, Yale, and the Corning Museum of Glass. (Inventory #: 5336)
$5,850.00 add to cart Available from Martayan Lan
Share this item
Martayan Lan, Inc.
Offered by