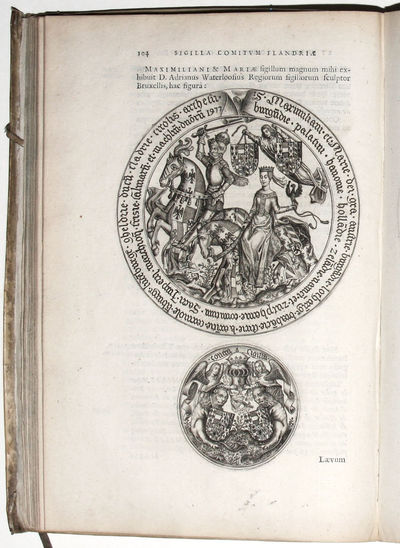 by VREDIUS, Olivarius
Bruges: Jan van den Kerckhove, 1639. Hardcover. Very Good. 4to [29 x 19.5 cm]. (6) ff., 308 pp., (48) ff., engraved half page map of Flanders, engraved succession 'tree' of Flemish Counts, engraved key to heraldry, and some 300 engravings of seals. Bound in contemporary vellum, title in ink on spine, ties intact. Minor handsoiling to covers, ownership inscription excised at foot of title with repair not affecting imprint, inkstain on Aa4 not touching image; some edge wear to first few leaves, a few small marginal tears; generally very good. Rare first edition Olivier de Vrée's (1596-1652) compendium of seals of the Counts of Flanders, a volume notable both for its antiquarian rigor - the work remains a standard reference on the subject - and for its some 300 copperplate engravings meticulously cataloguing the development of seals from the establishment of Flanders as a country in the ninth century (the 878 A.D. seal of Count Baldinus) to the time of the book's publication (the seals of Philip IV). Wax sigilla, impressed using a unique engraved metal matrix, were specific to individuals or institutions and used to certify official documents such as title deeds. Seals attracted the same sort of antiquarian study as coins - with which they were often collected and displayed - owing to their value as witnesses to ancient languages, history, art, and politics. Nor was the study of seals without real world importance during the seventeenth century, when reference to centuries-old documents could spark or halt the redrawing of European borders. The illustrations of the Sigilla Comitum Flandriae are profuse and of the highest technical quality. Executed by two father-son teams, Samuel & Adriaen Lommelin and François Schelhaver père et fils, the 300 engravings of seals are at once faithful to the wax artifacts they depict and even improve upon these models: Several specimens of exactly the same design but differing in size from each other by only a few millimeters are dutifully reproduced in separate engravings, while the fine detail of many engravings (especially the later examples) far surpasses that found in the seals themselves or even the engraved matricies with which they were impressed. The Sigilla Comitum Flandriae also contains a fine map of Flanders labeled with ancient toponyms, a depiction of the tomb slab of Gilles the Norman (d. 1227), a 'key' to help the reader identify coats of arms, and a tree of the succession of Flemish Counts, the latter with city views of Bruges and Ghent. Dutch and French editions of the Sigilla Comitum Flandriae followed in 1640 and 1641, but with engravings printed separately and not integrated into the textblock as in the present first edition. OCLC locates United States copies at the Newberry Library, the National Gallery, Wisconsin, Emory, Yale, Harvard, Minnesota, and Michigan. * Saffroy 40989; Matagne W-40; STCV 6687928; Biographie national VI, col. 22-24. (Inventory #: 4708)
$3,850.00 add to cart Available from Martayan Lan
Share this item
Martayan Lan, Inc.
Offered by