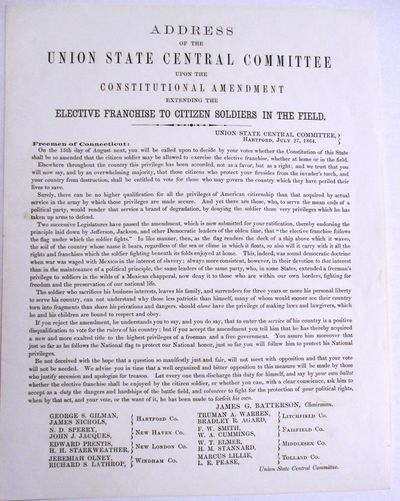 by [Connecticut]
[Hartford, 1864. Broadside, 7-1/2" x 9-3/4". Near Fine. A major issue in the 1864 presidential election was whether soldiers in the field, absent from their normal place of residence, could vote. Democrats, whose platform called for a negotiated peace, feared the effect of the 'soldier vote.' They argued that voters, including soldiers, could constitutionally exercise their franchise only where they resided. In Connecticut, Democrats opposing the Amendment referred to voting soldiers as "the armed cohorts of despotism" [Benton, page 177]. This broadside counters, as asserted by "Jefferson, Jackson, and other Democratic leaders of the olden time, that the elective franchise follows the flag under which the soldier fights." The broadside, signed in type by Chairman James G. Batterson and sixteen other Nutmeggers, warns voters that, "If you reject the amendment, [the soldier] understands you to say, and you do say, that to enter the service of his country is a positive disqualification to vote for the rulers of his country." The voters would approve the Amendment by a healthy margin. Josiah Benton, Voting in the Field. A Forgotten Chapter in the Civil War, pages 177-181 [Boston: 1915]. OCLC 58996586 [1- Lincoln Pres. Lib.] [as of April 2015]. (Inventory #: 31972)
$500.00 add to cart or Buy Direct from
David M. Lesser, Fine Antiquarian
Share this item
David M. Lesser, Fine Antiquarian Books LLC
Offered by

ADDRESSES DELIVERED AT THE INAUGURATION OF THE REV. JOHN GORDON, D.D., AS PRESIDENT OF HOWARD UNIVERSITY. WASHINGTON, DISTRICT OF COLUMBIA, WEDNESDAY, MARCH THE THIRTIETH, NINETEEN HUNDRED AND FOUR

Washington 1904
(click for more details about ADDRESSES DELIVERED AT THE INAUGURATION OF THE REV. JOHN GORDON, D.D., AS PRESIDENT OF HOWARD UNIVERSITY. WASHINGTON, DISTRICT OF COLUMBIA, WEDNESDAY, MARCH THE THIRTIETH, NINETEEN HUNDRED AND FOUR)
View all from this seller>