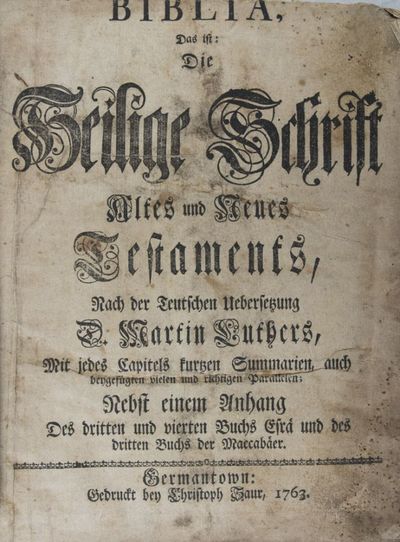 by Saur II, Christoph
Germantown, PA: Christoph Saur, 1763. Second edition. Hardcover. fair. Quarto. [4], 992, 274, [2]pp. Contemporary full calf over wooden panel, with decorative brass corners, and clasps. Beveled edges. All paper edges yellow. Decorative initials. In 1743, Christoph Saur (1693-1758), printed the first Bible in a European language (German) in America. 1,200 copies were printed in Germantown, Pennsylvania. Twenty years later, in 1763, a second edition of 2,000 copies (our copy) was printed by Saur's son Christoph (1721-1784). This was the first Bible printed in America on American-made paper. A third edition appeared in 1776 (3,000 copies), which was the first Bible printed from American-made type (see Darlow & Moule 4240). Spine and covers rubbed. One clasp missing. Front free endpaper detached but present. Back hinge starting. Upper margin of pages trimmed with sporadic and minor loss of captions. Title page darkened, and slightly foxed and chipped at corners. Title, Foreword, and first page remargined. Pages 36-48, 77-79 (Old Testament), remargined with loss of printed text replaced by previous owner's handwriten text. Page 697/698 (Old Testament), and 273/274 (New Testament) repaired with non abrasive tape (with minor loss of text). Page 275/276 (New Testament) remargined, with minor loss of text. Moderate to heavy age-toning and foxing throughout. Sporadic minor to moderate water-staining throughout. Text in German, gothic script. Binding and interior in overall fair condition. About the publisher: Christoph Saur II (1721-1784) became an elder in the Dunkers (modern Church of the Brethren) and would neither take an oath or bear arms. During the American Revolutionary War, Saur was arrested as a spy and, despite the long feud of the Saurs with Muhlenberg, appealed to General Peter Muhlenberg, the son of the pastor. Peter Muhlenberg (1746-1787) interceded with Washington and saved his life. At the end of the Revolutionary War, the pacifist Saur was treated poorly. His neighbors seized his property. Saur ended his life in poverty, earning income by binding books. (Inventory #: 39529)
$2,750.00 add to cart or Buy Direct from
Eric Chaim Kline Bookseller
Share this item