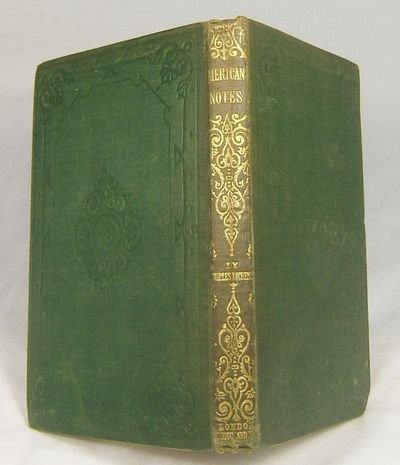 by Dickens, Charles
London: Chapman & Hall, 1850. Dickens, Charles. AMERICAN NOTES. Frontispiece by C. Stanfield. London: Chapman & Hall, 1850. Original blind-stamped green publisher's cloth with spines elaborately decorated in gilt. First "Cheap" Edition (actually volume 7 of the first and most important collected works of Dickens, with a new 2pp introduction and a specially commissioned new frontispiece). Begun in 1847 with writings already published, Dickens added further titles to his "works" as he went along. Despite being called "cheap" -- these volumes are just as high quality in texture and ornamentation as his first editions; there are 18 titles in total, we've never seen a complete set in fine original condition and individual volumes in collector's condition are scarce. NEAR FINE, spine a trifle browned (as almost always with this olive-green cloth), minor wear to the extremities, bright gilt, and excellent eye appeal. It would hard to find a better example of this traditionally, yet inexplicably, undervalued volume from Dickens's carefully-designed, newly prefaced and illustrated, first collection of his works. . First Edition Thus. Decorative Cloth. Near Fine. Illus. by C. Stanfield. (Inventory #: 001760)
$350.00 add to cart Available from
Lakin & Marley Rare Books
Share this item
Lakin & Marley Rare Books
Offered by