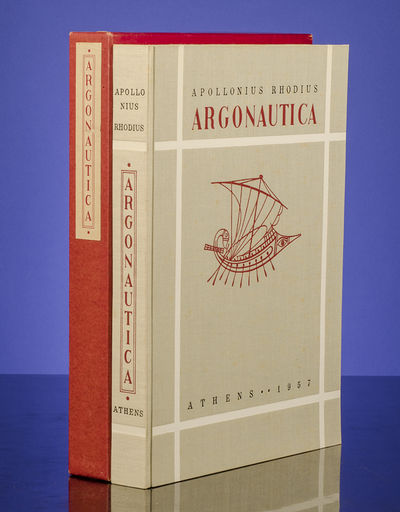 APPOLONIUS RHODIUS. TASSOS, A[nastasios Alevizos], illustrator. Argonautica or, the quest of Jason for the Golden Fleece, the epic poem set down in the ancient Greek tongue by Appolonius of Rhodes in the third century B.C. Together with the translation into English prose by Edward P. Coleridge; with a preface by Moses Hadas, illustrations by A. Tassos, and printed for the members of the Limited Editions Club. Athens: Aspioti-Elka Graphic Arts Company, 1957.

Publisher's full light-gray Grecian linen over boards, front cover pictorially stamped in red and black (with a design by A. Tassos), spine lettered in black and red, decorative end-papers. A fine copy in the original red cardboard slipcase.

Anastasios Alevizos Tassos (1914-1985) was a distinguished Greek engraver. In 1948 he became artistic consultant of 'Aspiotis-ELKA' lithography, and from 1954 to 1967 he created stamps on behalf of the Greek Post, initially using the technique of color woodcut and then the offset method. Also, from 1962 until his death, he designed the stamps of the Republic of Cyprus. In 1959 he became director of the Department of Graphic Arts at the Athens Technological Institute - ATO, where he taught until 1967. He was one of the founding members of the artistic group 'L evel', which honored him with a retrospective exhibition of his works in the first post-civil war years. At the same time presented his work at the Biennial of Venice (1952) and Lugano (1953). During the 1960s his subject matter began to focus on the performance of the human form. He gradually gave up color, engraved increasingly larger blocks of wood and began to create groups of works in three and four parts. At the same time he engaged with hagiography, while continuing to design books.

Anastasios Tassos illustrated two other books for the Limited Editions Club: The Anabasis (#420) and The History of the Peloponnesian War (#476)