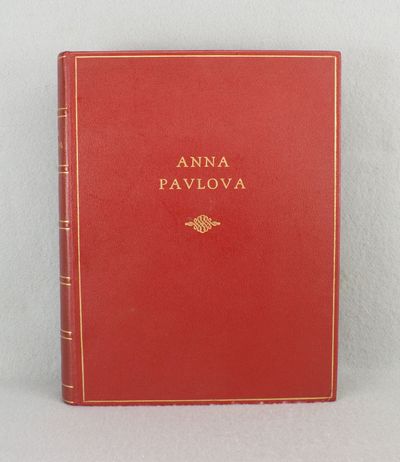 by (PAVLOVA, ANNA). SVETLOFF, V[ALERIAN]
Paris: de Brunoff, 1922. No. 30 OF 325 COPIES of the French edition, signed by the editor, Maurice de Brunoff. 343 x 260 mm. (13 1/2 x 10 1/4"). 194 pp., [1] leaf (colophon).Translated into French by W. Petroff. No. 30 OF 325 COPIES of the French edition, signed by the editor, Maurice de Brunoff. Pleasing contemporary red (publisher's deluxe?) pebble-grain morocco, upper cover with gilt lettering and calligraphic flourish, raised bands, spine panels with gilt sultana centerpiece, gilt titling, mustard yellow endpapers, edges untrimmed. In a modern marbled paper slipcase. With decorative engraved head- and tailpieces, 22 plates (with tissue guards), as called for, and more than 50 illustrations in the text. Two tiny nicks on back cover, one plate with light marginal foxing, otherwise only the most trivial imperfections; A VERY FINE COPY with especially clean and fresh leaves and in an unworn, lustrous binding. This is an attractively produced examination of the career of the great prima ballerina Anna Pavlova (1881-1931), who was at the height of her fame when it was published. Written by the leading St. Petersburg critic Valerian Svetloff, it begins with a background discussion of classical ballet, followed by accounts of Pavlova's classical training and performances in Imperial Russia, her breakthrough role in "Giselle" (which prompted her promotion to prima ballerina), and her work with her most important collaborator, the choreographer Michel Fokine. There is a brief autobiography by the dancer herself, and a listing of her repertoire of ballets and roles. The work is lavishly illustrated with photographs of the ballerina in various roles, among them her signature "Dying Swan," created for her by Fokine. There are also color illustrations of costumes and sets created by Leon Bakst and other noted designers. Pavlova was the first prima ballerina to form her own company and tour the world, and she became one of the first international superstars. This lavish production is testament to her fame and global appeal. (Inventory #: ST12683-053)
$1976.00 add to cart or Buy Direct from
Phillip J. Pirages Fine Books
Share this item

by GREGORY I, POPE