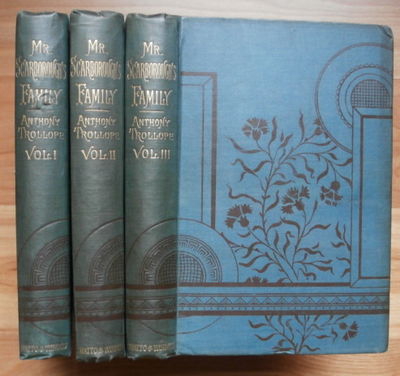 by Trollope, Anthony
1883. In Three Volumes. London: Chatto & Windus, 1883. 32 pp Vol I ads dated March 1883. Original blue-green cloth decorated in reddish-brown. First Edition of this novel about a man who valued his estate above his honor, and who accordingly tried to have his cake and eat it too... "He was luxurious and self-indulgent, and altogether indifferent to the opinion of those around him" (from the novel). John Scarborough, owner of a large landed property in Hertfordshire, resented the restrictions of the law of entail [predetermined succession of estate]. He accordingly devised a scheme whereby he was able by a double marriage, one before and one after the birth of his eldest son, to declare him illegitimate or not, as the future might make desirable... [Gerould] It is not hard to imagine the subterfuge and treachery this scheme creates between father, elder son and younger son. MR. SCARBOROUGH'S FAMILY first appeared serially in "All The Year Round," running weekly from May 1882 to June 1883, during which span (December 1882) Trollope died; this three-decker was published posthumously in May 1883. As with most Victorian three-decker novels, it was priced at 31s. 6d. but was offered at a steep discount to the lending libraries, so that most people could not afford to buy it but would rather have to rent it. This is a bright, near-fine set. There is, on the lower front cover of each volume, very faint evidence of the prior presence of library labels (like most copies). Otherwise the only flaws of note are a small scar on the Vol I spine, and the presence throughout the text of numerous ink-stamps of a Harrogate bookseller (most likely the original "lending library"). That said, the bindings are clean, the gilt is bright, and the volumes are quite free of wear -- the volumes have NOT been re-cased or re-backed, and the original endpapers remain intact. In all, rather remarkable condition for a novel that was produced for lending libraries to be rented out fortnightly and "read to death." Sadleir (Trollope) 66; Wolff did not have a copy. (Inventory #: 13081)
$1,950.00 add to cart or Buy Direct from
Sumner & Stillman
Share this item